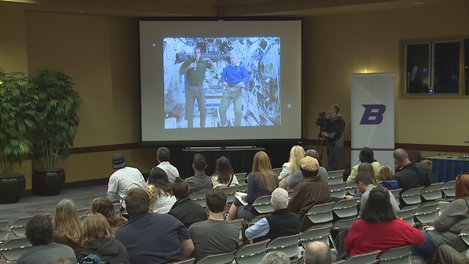 The Space Broncos hosted the Space Symposium on Tuesday which featured a live question and answer session with astronauts currently on board the International Space Station.

One of the astronauts was Steve Swanson, who chose to team up with students at Boise State University for interactive opportunities before heading up to the ISS. It’s a part of a program which NASA does with schools around the country to get students interested in STEM fields.

During the more than 20 minute live stream students with Space Broncos asked questions related to current experiments on the ISS. This included mini satellites, and even a veggie experiment meant to see how food grows in space.

“What does the conservation of angular momentum look like in microgravity?” (Hint: it has to do with flipping and spinning)

“Are there things you guys need to get used to again? Were there any surprises this time around?”

“Have you experienced any mental or attitude shifts that might surprise someone who’s never been to space?”

The technology and equipment needed for the presentation took more than a month to set up. A team of camera technicians, videographers – more than 100 people from BSU and NASA took part.
Watch the full Q&A session here.

The astronauts of Expedition 39 aboard the International Space Station have been working closely with BSU. They’ve helped students with various experiments in space over the past academic year.

Web articles – via partners/network co-ordinators. This website and its contents are the exclusive property of ANGA Media Corporation . We appreciate your feedback and respond to every request. Please fill in the form or send us email to: [email protected]
Previous: I-15 bridge collapse : Damage from freeway bridge fire hits $10m
Next: Mayor de Blasio’s daughter Opens Up About Recovery