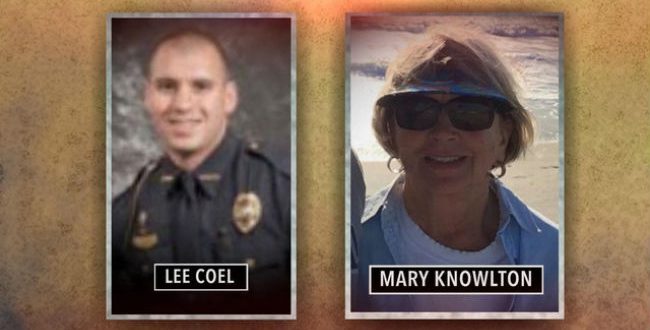 Knowlton attended the drill at a community center with her husband, she was playing the role of an officer, while officer Coel acted as the attacker. The officer fired his weapon, which was supposed to have blanks in it, but was loaded.

Coel has been on administrative leave since the incident, as the community continued questioning the apparent lack of procedures taken to ensure the gun was not loaded.

Coel turned himself in on Wednesday after learning an arrest warrant had been issued.

The 28 year old officer is charged with felony manslaughter and could be sentenced to 30 years in prison and $10,000 fine. Punta Gorda Police Chief Tom Lewis, faces charges of culpable negligence, a misdemeanor and was not arrested, but could serve 60 days in jail.

In November the city approved a $2 million payment for Knowlton’s family.

Web articles – via partners/network co-ordinators. This website and its contents are the exclusive property of ANGA Media Corporation . We appreciate your feedback and respond to every request. Please fill in the form or send us email to: [email protected]
Previous: Russian model dangles off Dubai skyscraper for photo shoot (Video)
Next: Air pollution may have masked mid-20th Century sea ice loss, says new study