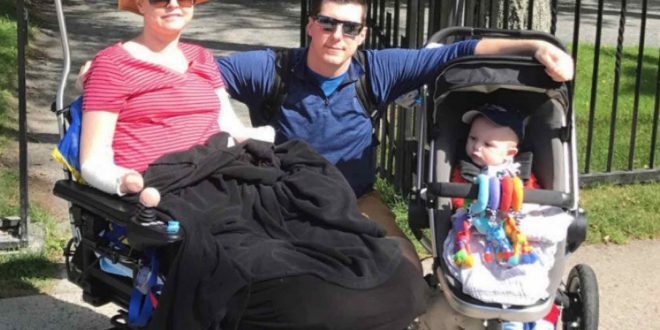 Lindsey Hubley: Mum who lost all her limbs after giving birth sues hospital

Lindsey Hubley: Mother sues hospital, she lost all her limbs after delivery

Lindsey Hubley, a Canadian mother has filed a claim against her doctors and the hospital she gave birth in after she lost all four limbs to a flesh-eating bacteria infection and now faces a kidney transplant..

The mother and her fiance Mike Sampson were given the all-clear to bring their son Myles home a couple days after he was born.

But the 33-year-old was rushed back with abdominal pain and skin discoloration. She needed emergency surgery.

Seven months later, she remains hospitalized following a hysterectomy and amputations of all four limbs—an outcome Hubley attributes to doctor negligence in a lawsuit filed Wednesday. The new mom was eventually diagnosed with necrotizing fasciitis, a flesh-eating disease.

“Our allegations are that had she been properly assessed when she presented at the hospital … a substantial part of the damage, if not all of it, could have been prevented,” says her attorney. He adds that his client suffered a vaginal tear during the birth and that part of the placenta was not removed, both of which could have contributed to the infection.

According to the CDC, flesh-eating disease most often occurs when bacteria enters the body through a break in the skin. “No mom should ever have to watch their fiance and their son walk out the door every night for over 200 days,” adds Hubley’s partner, Mike Sampson, 34, referring to Hubley’s long hospital stay. “Our lives have been turned upside down.” IWK has not responded.

Although necrotizing fasciitis may be caused by an infection with one or more than one bacterium, in most cases, the term flesh-eating bacteria has been applied to describe infections caused by the bacterium known as Streptococcus pyogenes. The term flesh-eating has been used because the bacterial infection produces toxins that destroy tissues such as muscles, skin, and fat. Streptococcus pyogenes is a member of the group A streptococci, a group of bacteria that are commonly responsible for mild sore throat (pharyngitis) and skin infections. Rarely, this form of strep bacterium causes severe illnesses such as toxic shock syndrome and necrotizing fasciitis. Most infections with group A streptococci result in mild illness and may not even produce symptoms.

Sometimes, other bacteria, including Klebsiella, Clostridium, E. coli, Staphylococcus aureus, or even a combination of different bacteria may produce necrotizing fasciitis. In 2012, a case was reported of a young woman who suffered a zip-lining accident on a river in West Georgia. She contracted an infection with the bacteria Aeromonas hydrophila, which produced a necrotizing infection that resulted in the loss of a leg and part of her abdomen. Vibrio vulnificus is a type of bacteria found in brackish water that has caused necrotizing fasciitis in swimmers who have been in infected water with open wounds.

What are the early symptoms of flesh-eating disease?

The early stage of necrotizing fasciitis is characterized by symptoms of redness, swelling, and pain in the affected area. Blisters may be seen in the involved area of skin. Fever, nausea, vomiting, and other flu-like symptoms are common. Another characteristic of necrotizing fasciitis is that the symptoms develop very rapidly, usually within 24 hours after a wound in the skin has allowed the bacteria to invade the tissues beneath the skin. The pain is described as being more severe than would be expected from the appearance of the wound. Late symptoms can include death (gangrene) of affected areas with scaling, discoloration, or peeling of the skin. Amputation of affected extremities is sometimes necessary.

Necrotizing fasciitis is treated with antibiotics, and early treatment is critical. Hospitalization, usually with treatment in the intensive-care unit (ICU), is required. Surgery to remove infected fluids and tissue is almost always necessary, along with medications to treat shock and other potential complications.

Good hygiene practices are the best way to prevent a bacterial infection of the skin. Prevention of infection includes avoidance of swimming in pools or open water sources, or soaking in hot tubs, with open wounds or sores. Additionally, keeping open wounds covered with dry bandages until healed, washing hands often, and proper care of wounds and injuries, including scrapes, blisters, and cuts, can prevent necrotizing fasciitis.

Web articles – via partners/network co-ordinators. This website and its contents are the exclusive property of ANGA Media Corporation . We appreciate your feedback and respond to every request. Please fill in the form or send us email to: [email protected]
Previous: The last common ancestor of humans was like a gibbon, finds new research
Next: Children’s Obesity Rates in Rich Countries May Have Peaked, Says New Study