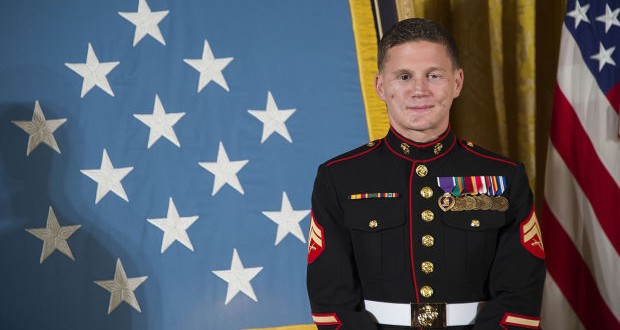 Kyle Carpenter, a Marine Medal of Honor recipient, was just charged by the Columbia Police Department in South Carolina in connection with a hit and run incident.

Columbia police say that Kyle Carpenter turned himself into officers Thursday, and is charged with hit and run involving personal injury, as well as making an improper left turn.

At approximately 8:30 p.m. on the night of Dec. 8, Carpenter struck a pedestrian crossing Assembly Street at Blossom Street in Columbia, police said. According to the incident report, Carpenter made an improper turn by turning into the outside lane instead of the inside lane.

CPD says Kyle Carpenter pulled over and turned on his hazard lights, but did not check on the victim, Michael Haddad.

Haddad, police said, stood up and walked into the nearby University of South Carolina Strom Thurmond Fitness Center. That’s when CPD says Carpenter drove away from the scene.

Police say Haddad suffered abrasions and a leg injury, but is expected to make a full recovery.

Carpenter and Haddad, police said, have been fully cooperative with the investigation and neither were under the influence of alcohol or drugs.

His attorney says Carpenter thought the pedestrian was uninjured.

In a statement emailed to the AP Thursday, attorney Butch Bowers says Carpenter based that on the pedestrian’s reaction and ability to walk across the street, apparently without difficulty. He says Carpenter is cooperating fully with police and taking responsibility for the accident.

Carpenter received the Medal of Honor in June 2014 for his actions in Afghanistan in November 2010. According to military reports and other Marines who were on the patrol, Carpenter fell forward on a nearby grenade, shielding several others from the explosion.

He was booked at the Alvin S. Glenn Detention Center and released on bond.

Web articles – via partners/network co-ordinators. This website and its contents are the exclusive property of ANGA Media Corporation . We appreciate your feedback and respond to every request. Please fill in the form or send us email to: [email protected]
Previous: Olivia, Ethan BC’s number one baby names in 2014
Next: Stunning Northern Lights outshine NYE fireworks (Picture)