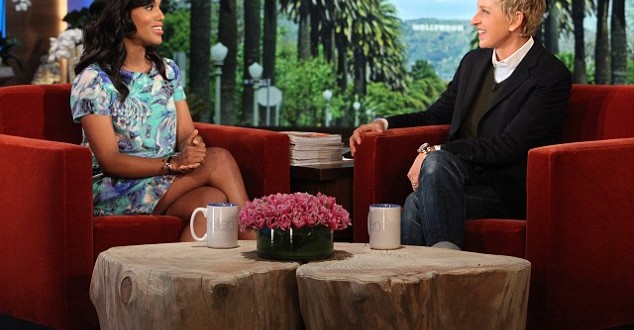 The ‘Scandal’ actress camouflaged her growing baby bump for her appearance on ‘Ellen,’ but though she kept her pregnancy under wraps, she did open up about motherhood! Find out what she had to say!

Kerry Washington disguised her growing baby bump in a for her Nov. 14 appearance on Ellen. The actress sported a flowing silky shift dress that kept the focus off her torso –and on to her pregnancy glow! Do you like her style, or are you hoping she’ll start highlighting her pregnancy?

Mum was the word for this first-time mom-to-be, who looked fabulous in a billowy blue-flowered sheath that trailed to her knees and neutral-toned pumps.
Kerry was such a good sport, however, when Ellen made fun of her large collection of magazine covers.

The chat show host surprised Kerry by bringing up several mock-up images of faux magazines such as Chess Masters and Kale Quarterly.

Playing right along, Kerry responded by saying: ‘This is a nightmare. They’re all here.’

‘That one I’m proud of,’ Kerry said, referring to Knitting Week, and of Chess Masters, added: ‘I worked hard for that. Thank god for my publicist for that one.’

And of her pretend Pantsuit Monthly cover, Kerry quipped: ‘I’m actually the editor-in-chief of that one.’

Kerry had a creative reply for Kale Quarterly, boasting: ‘Kale is really good for you. You know I’m a Gaga fan, so when she did the meat dress, I said I would do the kale dress.’

The Django Unchained star – who wed football player Nnamdi Asomugha on June 24 – admitted that she doesn’t even keep her press cuttings in her home, leaving that task to her adoring mother.

Web articles – via partners/network co-ordinators. This website and its contents are the exclusive property of ANGA Media Corporation . We appreciate your feedback and respond to every request. Please fill in the form or send us email to: [email protected]
Previous: Richard branson sells $200,000 tickets for flights to outer space (VIDEO)
Next: George Clooney lookalike once offered £5,000 gig : To Have Sex With Man’s Wife