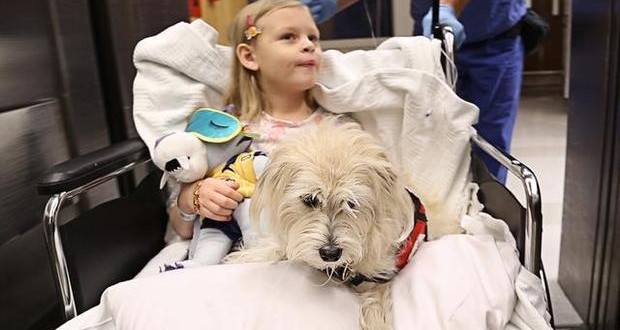 kaelyn krawczyk : Apex girl with a rare disorder has a guardian angel (VIDEO)

A 7-year-old girl and her dog share an inseparable bond, so much so that her four-legged friend underwent surgery with her.

Kaelyn “KK” Krawczyk suffers from mast cell activation disorder. Because of her rare condition, KK is susceptible to suffering episodes that can include a severe drop in blood pressure and trouble breathing. Even the anesthetic used for procedures to help the child can trigger an attack.

The Apex family wanted to get a service dog that would alert them if KK was having a medical emergency. They got a dog named “JJ” from a Chapel Hill nonprofit called Eyes, Ears, Nose, and Paws. The organization trained JJ to detect the scent KK gives off shortly before one of her episodes.

“She can go from just a normal every day activity to a life threatening event in a matter of no time,” said K.K.’s mom Michelle.

Since J.J. has been trained to sense changes in K.K.’s body, doctors decided to let her four legged friend go into the operating room to assist during a medical procedure when K.K. had to be put under general anesthesia.

“It struck us that J.J. is really just an additional monitor that provides information about what’s going on with K.K.,” said Dr. Brad Taicher of Duke University Medical Center.

The procedure went as planned and J.J. clearly knew it was going well.

Once again, all went well during today’s procedure which was intended to help prevent recurrent infections in K.K.

Web articles – via partners/network co-ordinators. This website and its contents are the exclusive property of ANGA Media Corporation . We appreciate your feedback and respond to every request. Please fill in the form or send us email to: [email protected]
Previous: Most affordable places to retire abroad in
Next: Harvard Monkeys Die From Mistreatment : USDA Fines School $24K for Deaths of Lab Animals