Home » World » Irwin Corey, the king of comedic confusion, dies at the age of 102 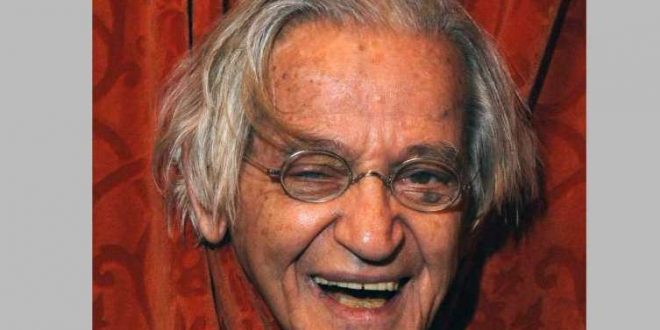 Irwin Corey, the king of comedic confusion, dies at the age of 102

Irwin Corey, the king of comedic confusion, dies at the age of 102

Comedian and actor Irwin Corey, for whom the word “however” was the perfect opening line, has died at age 102.

Irwin passed away at 6:27 PM tonight in his home. He had just eaten Vanilla Ice Cream Swirl followed by Egg Drop Soup. (The Ice Cream didn’t satisfy him so he sent his son out to get the soup.) After the soup he complained that the covers were too heavy on his feet. (This was odd since he usually complained that there wasn’t enough covering him.)

His Nurse adjusted them and when she looked up he was gone.

Corey was also famous for his below-radar charity work. For 17 years, the comedian panhandled copies of The Village Voice (a free print publication, mind you) to motorists entering 35th street at 3rd Avenue. He would then roll up whatever change he collected each afternoon and donate to an organization “that buys medical supplies for children in Cuba,” according to the a New York Times profile from 2011.

Corey was born in 1914 and grew up in the Brooklyn Hebrew Orphan Asylum during the Great Depression. He was famous for his stand-up appearances and showmanship — including an unforgettable acceptance speech on behalf of Thomas Pynchon in 1974 and campaigning for high office on Hugh Hefner’s Playboy ticket during the 1960 presidential election — as well as his performances in movies like “The Curse of the Jade Scorpion” and the bonkers 1976 comedy “Car Wash.”

He also welcomed several gadflies and ne’er-do-wells about town into his home for a toke and to bullshit about American imperialism and the framed letter of apology from Hefner on his living room wall, “which may qualify as the single most Jewish item in New York City,” according to Jay Ruttenberg’s “New York Punk” essay in the 2014 edition of The Lowbrow Reader. “Observant types, with their mezuzahs and ketubahs, are rendered mere goyim, trembling at the feet of the man with a framed letter of apology.”

Corey was also a lover of the ganja. Case in point: Another jackhole who often visited Corey’s home was colleague and Death and Taxes e-i-c Brian Abrams, who, in 2009 when laboring for the now-defunct print quarterly Heeb Magazine, filmed Corey for a website promo that, with his meta-prankster wit, had purposefully bungled. “I was so wrecked I honestly had no idea,” Abrams admitted.

Web articles – via partners/network co-ordinators. This website and its contents are the exclusive property of ANGA Media Corporation . We appreciate your feedback and respond to every request. Please fill in the form or send us email to: [email protected]
Previous: Federal Liberal government to provide Bombardier $372.5 million in repayable loans
Next: Christie Brinkley returns to Sports Illustrated Swimsuit Issue at age 63 (Photo)