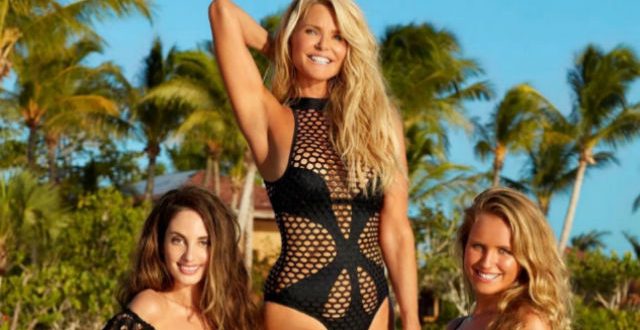 Christie Brinkley has now appeared in Sports Illustrated nine times over the course of her storied career, and if you’re surprised to see the 63-year-old in this year’s swimsuit issue, you’re not alone.

The annual magazine, which typically features young women with the impossible to attain perfections of fashion models, is legendary in the United States, where it sold 785,000 copies in 2014 on its 50th anniversary.

Over the years, it has nonetheless sought to challenge the often criticized monopoly of young, white models projected by the fashion industry in general.

In 1996, model Tyra Banks became the first black woman to appear on the cover. Athletes such as tennis champion Serena Williams and mixed martial artist Ronda Rousey have also been photographed for the magazine.

For the February 15 edition, which comes out days after Brinkley celebrated her 63rd birthday, she is joined by her daughters Sailor Brinkley Cook, 18, and Alexa Ray Joel, 31, whose father is singer Billy Joel.

“Thank you Sports Illustrated for sending the powerful message that good things come in packages of every size and we do not come with an expiration date!” she wrote on her Instagram page.

The magazine said on its website that the four-times married Brinkley proved that “age is nothing more than a number.”

Web articles – via partners/network co-ordinators. This website and its contents are the exclusive property of ANGA Media Corporation . We appreciate your feedback and respond to every request. Please fill in the form or send us email to: [email protected]
Previous: Irwin Corey, the king of comedic confusion, dies at the age of 102
Next: Male Birth Control Gel Works in Monkeys, Research Shows