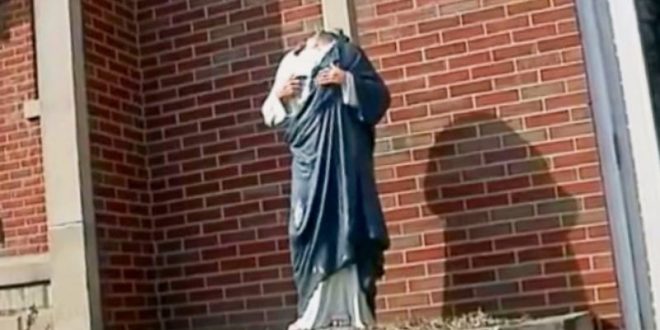 A statue of Jesus Christ was beheaded for the second time in two weeks near the front doors of a church in Indianapolis, Indiana, over the weekend.

The statue stands outside the Cottage Avenue Pentecostal Fellowship in Indianapolis and was decapitated for the first time two weeks ago. The head was left behind and the church was able to quickly reattach it. In the second incident, the vandals took the head with them.

“The first time is vandalism, the second time there’s got to be a hatred to it,” churchgoer Leroy Myers, whose daughter donated the statue five years ago, told RTV6.

Church officials don’t know if or when the headless statue, which remains outside the front door, will ever be repaired as the missing part has not been found.

“It’s still headless, we haven’t gotten it fixed yet,” Pastor Brad Flaskamp told CNN. “Don’t know if we can.”

Flaskamp said the statue was actually knocked over the first day it was installed years ago, but hasn’t be targeted again since the first beheading incident two weeks ago.

Pentecostal was one of several Indianapolis churches vandalized over the weekend, including one which had profanities spray painted onto the building and another which was broken into and damaged, reports RTV6.

Web articles – via partners/network co-ordinators. This website and its contents are the exclusive property of ANGA Media Corporation . We appreciate your feedback and respond to every request. Please fill in the form or send us email to: [email protected]
Previous: Metallic hydrogen lost in laboratory, Harvard researchers reveal
Next: Russian model dangles off Dubai skyscraper for photo shoot (Video)