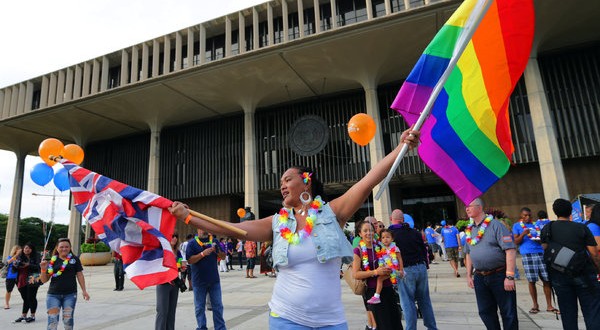 The U.S. Pacific state of Hawaii is about to become the 15th in the United States to allow same-sex couples to marry.

On Tuesday, the Hawaiian state senate gave final approval to a bill extending marriage rights to same-sex couples in the state long popular as a wedding and honeymoon destination. As the vote took place, hundreds of supporters who filled the chamber’s visitor galleries and the Capitol rotunda cheered and applauded.

In her interview with Honolulu Magazine, Rep. Jordan discusses the reaction she received from religious groups and gay-rights activists before and after the house vote:

I totally thought I was going to get blasted by the religious community. When I walked into the hearings, I was like, those faith-based guys are going to come out. And not one of them said anything. They were more about, “Thank you, thank you for listening.” And they didn’t know who I was. Outside, I was Rep. Jordan sitting at the table. They had no idea who I was, or my lifestyle, and that’s why I like it. …

I was blasted by the GLBT community on Saturday, outside the door. That took me aback. … These were testifiers the day before, saying, “How can you be undecided? You should be a ‘yes.’ Do you know what this means?” And I politely engaged with them: “I have some problems with SB1.” I explained the issues and they slammed me again. “It’s good. Just vote yes.” They started getting boisterous. My natural instinct is, I’m going to fly some words at you. But you can’t, so I’m like, “Thank you.”

It has been interesting. I am not part of any faith-based group, so I walked in thinking those were going to be the ones going, grrrr, grrrr. But unfortunately, it’s been coming from my community during the hearing. I was like, “Wow, so much for minorities that have been suppressed.” But I’ve got to look at it this way: Maybe they feel they’ve been suppressed for so long that they no longer can contain it and they are just going to lash out at anything without thinking first. But I have to keep that faith to help me not take it personally. It’s not about who is right and who is wrong. It’s about, are we creating a measure that meets the needs of all?

I had come to the decision that SB1 needed to amended. It wasn’t protective enough for everybody. And I truly know, my GLBT community is not going to go somewhere where they are not welcome. They are not going to go, “Pastor, you need to marry us, even though it is against your grain.” Because they want their happy day to be a happy day. A couple isn’t going to step into something that’s not warm and welcoming. We’re really looking at those fringe guys, those ones that pop up on the edges that say, “You’re treading on my rights, so I’m going to come and challenge you.”

In the end, Rep. Jordan voted against the bill because, she said, it did not offer adequate protections for religious freedom:

I’m not here to protect the big churches or the little churches, I’m saying we can’t erode what’s currently out there. We don’t want to scratch at the religious protections at all, because if we don’t create a measure that’s bulletproof, or as close to bulletproof as possible, then the measure will go to the courts. And they will interpret it however that may be. A judge will make assumptions and make a ruling, and that will become the law of the land. So you really want us to create the legislation.

I haven’t figured out why I felt so compelled to fight for the religious exemptions, to not erode Constitutional rights. I don’t belong to any particular denomination. I don’t wear one of those hats. I take religion out of everything. My religion is the mountain, the aina and spiritual. Everybody finds their own religion somewhere. I have the same values as they do, but it’s just a little different. When I walked into this session, that rose to the surface. Why me? Why am I trying to protect your religious rights?

Web articles – via partners/network co-ordinators. This website and its contents are the exclusive property of ANGA Media Corporation . We appreciate your feedback and respond to every request. Please fill in the form or send us email to: [email protected]
Previous: Shawn portwood reveals that Amber will be out of jail early
Next: Ricky Williams coaches at the University of the Incarnate Word : Reports