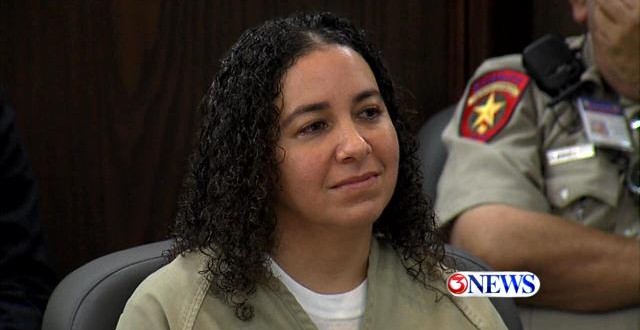 Hannah Overton, the Corpus Christi mother who was convicted of murder in the salt-poisoning death of her foster son in 2006, is being released from jail on $50,000 bail.

At the hearing, Hannah Overon’s appellate attorney called several witnesses to testify about their experience with her.

Pastor Joe Fauss with the Calvary International Commission testified about his experience with Hannah as a teenager, when she babysitted for kids in his group and took part in mission trips to help children in places like Reynosa, Mexico.

Richard and Tanya Subialdea then testified separately about Overton’s interaction with their disabled son.

Richard Subialdea said Hannah Overton was the best caregiver he ever had.

Pastor Kenneth De Koning and his wife Sibyl then testified that based on their experience with Overton, they would allow her to take care of their grandchildren without hesitation

Following the testimony about her character, defense attorneys argued several matters of evidence in the case.

They claimed if samples of Andrew’s vomit from the urgent care clinic were available for analysis by the defense, it could have made a difference in the outcome of the case.

They also discussed the opinions of Dr. Michael Moritz, a salt poisoning expert, which were not presented to the jury in the original trial.

Moritz believes the blood sodium level of Andrew Burd would have made it highly unlikely for him to survive, even if he received immediate medical attention.

Hannah Overton’s conviction of Capital Murder was based on her not providing timely medical care.

Her attorneys went on to question other facts presented in the original trial, and suggested at least one doctor who testified in 2007, Dr. Alex Rotta, now questions the district attorney’s decision to re-try Hannah Overton.

Pastor Rod Carver of the Calvary Chapel of the Coastlands then testified that Hannah’s ties run deep in the community, from her own family to her involvement with his church.

Carver also testified that although a previous member of his church was able to post her original bond in 2006, that member is gone, and the church is not capable of coming up with the same $250,000 that was posted before.

A letter from a prison guard in Gatesville was also presented.

The guard wrote than in his six and a half years of interaction with Hannah Overton, she appeared to be “the epitome of a model prisoner” and “admired by her fellow inmates”.

After serving seven years in prison, Hannah Overton was transferred back to the Nueces County Jail when the Texas Court of Criminal Appeals ruled she received “ineffective counsel” at her trial.

A jury sentenced Hannah Overton to life in prison in September 2007 after her foster son, Andrew Burd, died from a sodium overdose.

214th District Judge Jose Longoria, who presided over the original trial, was recently removed from the case, after Hannah Overton’s attorney argued he had a conflict of interest.

Judge Longoria had previously hired a lighting company that employed Overton’s husband. Additionally, a relative of Overton is married to Longoria’s stepdaughter.

Web articles – via partners/network co-ordinators. This website and its contents are the exclusive property of ANGA Media Corporation . We appreciate your feedback and respond to every request. Please fill in the form or send us email to: [email protected]
Previous: 99-year-old Woman Robbed While Delivering Cookies (Video)
Next: FedEx Truck Accident – Video: FedEx Truck Crashes In Georgia, Spilling Packages On Highway