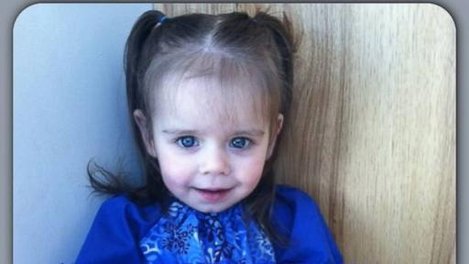 A woman is traveling hundreds of miles to help a child she’s never met after hearing about her story on Facebook.

Two-year-old Arianna Moore has been on kidney dialysis since shortly after she was born in Minnesota.

After months of waiting for a donor her mother created a Facebook page appealing for help.

Booth became desperate to find her daughter a donor, and while she wasn’t optimistic about posting on Facebook – she figured she’d try her luck anyway.

‘I had no faith that we’d find a kidney donor on Facebook but I sure as heck was going to try,’ she told Good Morning America.

But the post surprisingly turned out to be fruitful when Harding read it on her wall.

‘One of my friends shared one of Arianna’s pictures and it showed up on my timeline,’ Harding said. ‘For some reason, I stopped and started thinking about it, and I just knew I had to make a phone call.’

Harding then contacted Arianna’s hospital in Minneapolis to see if she was eligible, and after a few tests she figured out she was a perfect match. She says she was inspired to donate because she has a 2-year-old daughter herself, and would hope someone would perform the same act of kindness for her girl.

Web articles – via partners/network co-ordinators. This website and its contents are the exclusive property of ANGA Media Corporation . We appreciate your feedback and respond to every request. Please fill in the form or send us email to: [email protected]
Previous: Chrissy Teigen In Cosmo
Next: Dave Walker : Missing Canadian found dead