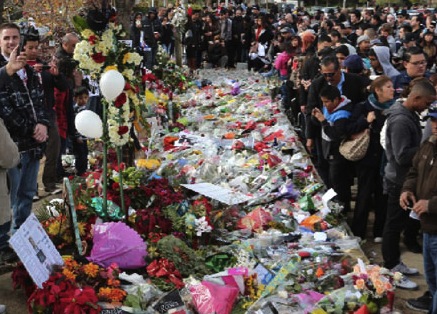 The sounds of high-performance car engines filled the air Sunday as thousands of fans, friends and car enthusiasts headed to the Los Angeles suburb of Santa Clarita to pay tribute to Paul Walker at the site where the “Fast & Furious” actor died in a car crash.

Many fans joined the service in high performance vehicles as a nod to Walker’s own love of cars and for his starring role in ‘The Fast and the Furious’ movie franchise.

Several cars which Walker drove in the street racing movies were on display in a nearby church car park along with a huge canvas, with a photo of Walker and Rodas on it, which fans could sign.

Walker and Rodas died when the Porsche GT, which Rodas was driving, collided with a lamppost and a tree before it burst into flames. The autopsy report stated, Walker died from “combined effects of traumatic and thermal injuries,” meaning the actor not just from impact injuries, he also burnt to death.

The tragedy has been devastating to his fans as well as the actor’s co-stars, who have used social media to pay their respects to Walker.

Web articles – via partners/network co-ordinators. This website and its contents are the exclusive property of ANGA Media Corporation . We appreciate your feedback and respond to every request. Please fill in the form or send us email to: [email protected]
Previous: LA Lakers Owner Jerry Buss’s California Mansion lists at $5.95 million
Next: Shipwreck hunter finds Keystone State in Lake Huron (VIDEO)