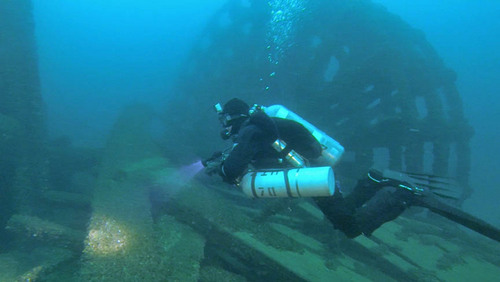 “When you virtually have thought that you would never find something you were looking for, and finally it comes up and you find it, you say ‘Wow.'”

After 20 years David Trotter and his team of divers finally found it – the Keystone State shipwreck in the waters of Lake Huron near Alpena. The steamer was one of the finest to travel the Great Lakes in the 1800s.

“She was called a palace steamer because she was of very ornate design and had very comfortable accommodations for passengers that could afford that kind of travel,” Trotter explains.

Thunder Bay National Marine Sanctuary deputy superintendent Russ Green said it is exciting anytime a wreck is discovered, and he looks forward to learning more about it.

“When a ship disappears like that, it adds to the drama,” he said. “It’s a really interesting story.”

Maritime historian C. Patrick Labadie said the vessel was one of the first ships that weighed more than 1,000 tons, and was known as a palace steamer based on the elegant rooms and accents.

Labadie said he is excited to learn more about the steamer and her story from the wreckage accounts of Trotter and his crew.

Trotter said he dispaired he would never find the Keystone State after searching in the Thumb during 1993. Therefore, when Trotter and his crew did find the steamer, and it was around 40 to 50 miles above Port Austin, they were surprised the ship had made it so far north.

“Somehow she struggled forward and managed to work up the lake, even in the terrible storm,” Trotter said. “As she struggled up north she would have even more difficulty trying to maintain course which ultimately caused the vessel to end up out in the middle of the lake. I can paint a very graphic picture of her final hours.”

Trotter said the crew eventually would have decided to pitch the cargo over the side to lighten the ship, which explains the absense of cargo at the wreck site. Water would have continued to come in, bilge pumps would be running to try and decrease the leakage but would lose headway as water was coming in faster than they could pump out.

Finally, the water would reach the fire boxes in the boiler and douse the fire, leaving the vessel at the mercy of the storm with no power. The crew would know what was going to happen since they had no life boats, so they would start tieing things together to have something to climb onto or grab ahold of when the ship sank.

“They know it’s going to sink. At this point they are facing the end of the ship,” Trotter said. “There would be people clamoring onto parts they had stripped or thrown into the water and eventually the ship would just disappear very quickly and thrust herself to the bottom. What’s left is some of the debris, and people holding onto it. In the horrific conditions in November, hypothermia would take over.”

There were never any bodies found from the Keystone State.

“Her paddle wheels are beautifully entact. Her big engine is there. The boilers are just tremendously beautiful sights,” he said. “She has less intactness than we might have hoped. She had tremendous working damage during the time she was working her way north.”

The discovery of the Keystone State offers historians a rare opportunity to view a mid 1800s vessel, and peek into the lives of that time period.

Web articles – via partners/network co-ordinators. This website and its contents are the exclusive property of ANGA Media Corporation . We appreciate your feedback and respond to every request. Please fill in the form or send us email to: [email protected]
Previous: Fallen stars of 2013 : Paul Walker memorial in California draws thousands
Next: Actress Jessie Wallace to star in London musical