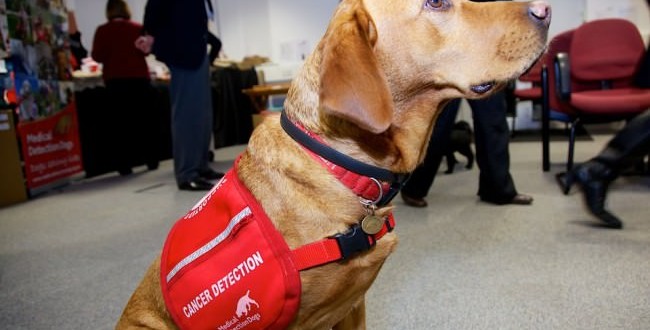 Dogs may help in the fight against prostate cancer because of their unique abilities to detect it. A study presented at the American Urological Association reveals that dogs can find the cancer through smell, and they have a high accuracy rating. The researchers believe the animals can be trained to quickly identify the cancer in men.

Canines have 220 million olfactory cells, compared with a measly 50 million in humans. As Bloomberg reports, tumors emit chemicals called volatile organic compounds (VOCs) that dogs are able to smell. VOCs have been detected in the breath of colon and lung cancer patients, and in the urine of men with prostate cancer. Researchers would like to develop an “electric nose” that replicates a dog’s ability to sniff out cancer.

At the University of Pennsylvania School of Veterinary Medicine, researchers have been working with a German shepherd name Tsunami. Tsunami has been able to successfully identify the smell of ovarian cancer in more than 90 percent of tissue samples that she sniffed. Ovarian cancer has no effective early-diagnosis test, but if it’s found in time, the five-year survival rate is more than 90 percent.

A separate study led by Gian Luigi Taverna, head of urology pathology at Istituto Clinico Humanitas in Italy, found that cancer-sniffing dogs found prostate cancer in urine samples with 98 percent accuracy. “Our study demonstrates the use of dogs might represent in the future a real clinical opportunity if used together with common diagnostic tools,” he said. Read more about the various findings at Bloomberg.

Web articles – via partners/network co-ordinators. This website and its contents are the exclusive property of ANGA Media Corporation . We appreciate your feedback and respond to every request. Please fill in the form or send us email to: [email protected]
Previous: Kendra Wilkinson : Reality star gives birth to baby girl via C-section
Next: Coffee Rust Fungus Raising Prices for High-End Blends, Report