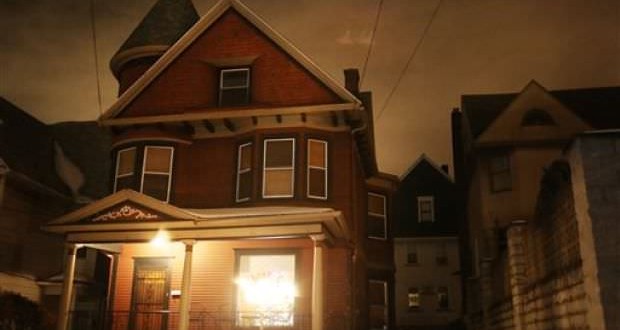 A Pennsylvania couple has drawn national attention for the ad they wrote attempting to sell their house. The four bedroom 1901 Victorian has now become a draw for ghost hunters.

The ad for the house at 1217 Marion St. in Dunmore casually tells potential buyers that the building is, “slightly haunted. Nothing serious, though.” Greg and Sandi Leeson go on to describe random screams in the wee hours of the morning and “the occasional ghastly visage” in mirrors.

There were calls from ghost hunters. An open house attracted lots of curiosity seekers, but no legitimate buyers. And a former resident came out of the woodwork to tell the couple that when he was a kid, he found a human skull in the basement — the same basement whose door Sandi Leeson once barricaded because she swore she could hear the clicking of a cigarette lighter emanating from the subterranean depths.

It’s enough to make her husband wonder whether he did the right thing when he playfully wrote about the home’s spooky charms:

“Slightly haunted. Nothing serious, though,” says the listing on Zillow’s real-estate site. It goes on to describe 3:13 a.m. screams and “the occasional ghastly visage” in the bathroom mirror.

The listing attracted local and national media attention. Now the Leesons just need an actual buyer for the four-bedroom home, on the market for $144,000.

“I tried to word it with a little bit of a sense of humor,” says Greg Leeson, a 35-year-old who works in information technology, but “I don’t think it has helped with marketing. We’re not really getting very many interested buyers. We’re getting a lot of nonsense people.”

Spring should bring more traffic. But if it doesn’t sell, Leeson said they might consider renting it out — by the night — to folks looking for spooky thrills.

Of course “slightly haunted” is just another way of saying that the home comes with some unwanted tenants that refuse to leave.

Truth be told, renting the property out to ghost tourists might prove exponentially more lucrative than just selling it outright. Things like ghost tours and haunted bed and breakfasts seem to be a burgeoning industry. The Leesons would do well to rake in some of those terror dollars while they can.

Web articles – via partners/network co-ordinators. This website and its contents are the exclusive property of ANGA Media Corporation . We appreciate your feedback and respond to every request. Please fill in the form or send us email to: [email protected]
Previous: Actor Benedict Cumberbatch Almost Turned Down ‘Sherlock’
Next: Surprised Nun Gives Birth In Italy