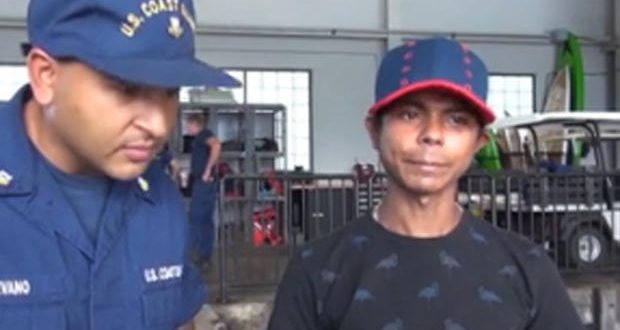 The U.S. Coast Guard says a Colombian mariner has been rescued after surviving a two-month ordeal in the southeastern Pacific, but his three companions reportedly died.

Merchant mariners on the Panamanian-flagged Nikkei Verde rescued the man and notified the Coast Guard on April 26 after they spotted him during a voyage to China. The man, who was not identified by authorities, was on a 23-foot skiff drifting 2,150 miles southeast of Hilo, Hawaii.

The Coast Guard gave the freighter’s crew medical advice and met with the ship Wednesday.

The man told authorities he and three companions set sail from Colombia more than two months before his rescue. They became stranded when skiff’s engine went out. He survived by catching and eating fish and seagulls. His companions died at sea, according to the Coast Guard.

Their bodies weren’t recovered, although the man kept their passports and handed them over to authorities, the Coast Guard said.

“The Pacific is vast and inherently dangerous,” said Lt. Cmdr. John MacKinnon, chief of the Coast Guard’s Joint Rescue Coordination Center. “This mariner had great fortitude and is very fortunate the crew of the Nikkei Verde happened upon him, as the area he was in is not heavily trafficked.”

Although the Coast Guard assisted in the man’s rescue, authorities said they would not be investigating the case because “the circumstances fall outside Coast Guard purview.”

Web articles – via partners/network co-ordinators. This website and its contents are the exclusive property of ANGA Media Corporation . We appreciate your feedback and respond to every request. Please fill in the form or send us email to: [email protected]
Previous: Captain America Civil War 2016: Super-Bro Against Super-Bro “Trailer”
Next: Gina Short: ‘Cancer patient’ wins the lottery twice in three months