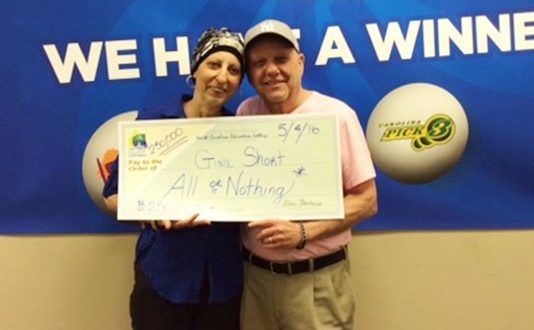 Gina Short, of Mecklenburg County, has another reason to keep smiling and celebrating each day. Gina beat the lottery odds of 1 in 2.7 million to win the top All or Nothing Prize of $250,000. You could say luck is on Gina’s side because this is the second time in a year she’s won big.

A few weeks ago Gina was feeling lucky and asked her husband, Len to buy a lottery ticket.

Gina said, “We checked the same ticket six or seven times because we thought we misread it.”

Gina has been undergoing chemotherapy treatments. Len said, “We’ll use the money for Gina. She’s the priority. She’s No. 1.”

Len said, “For us to have the good fortune of winning not just one big prize but two, we are just very thankful for that.”

Web articles – via partners/network co-ordinators. This website and its contents are the exclusive property of ANGA Media Corporation . We appreciate your feedback and respond to every request. Please fill in the form or send us email to: [email protected]
Previous: Coast Guard helps rescue Mariner after two months adrift in Pacific
Next: Galaxies lurking in distant glowing dust, says new research