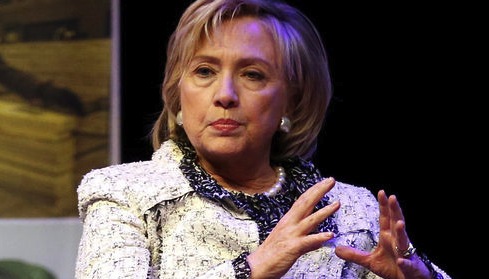 Clinton on Nigeria : Kidnapping of Nigerian girls is “abominable"

Clinton on Nigeria : Kidnapping of Nigerian girls is “abominable”

Former Secretary of State Hillary Clinton is the latest international leader to condemn the kidnapping of nearly 300 schoolgirls in Nigeria, an act she called “abominable.”

The girls were taken by Boko Haram, an Islamic extremist group in the country, and the Nigerian government does not know where they are even though more than two weeks have passed.

The kidnapping was “abominable, criminal, an act of terrorism and really merits the fullest response possible first and foremost from the government of Nigeria,” Clinton said in an interview with ABC’s Robin Roberts Wednesday.

On Tuesday, the White House announced it is sending a team to Nigeria to aid the effort to find the girls and those responsible. And just hours before, the Senate passed a resolution condemning the kidnapping, saying it’s time to send a message to the “bad guys” that they need to leave the girls alone.

On Sunday, Clinton tweeted her support of the effort to find the girls.

Clinton’s remarks came at Philanthropy New York’s annual meeting, which was held at the Ford Foundation in New York City.

Web articles – via partners/network co-ordinators. This website and its contents are the exclusive property of ANGA Media Corporation . We appreciate your feedback and respond to every request. Please fill in the form or send us email to: [email protected]
Previous: Researchers find the Black Death had a silver lining
Next: Artificial DNA Breakthrough Could Lead to New Treatments, Report