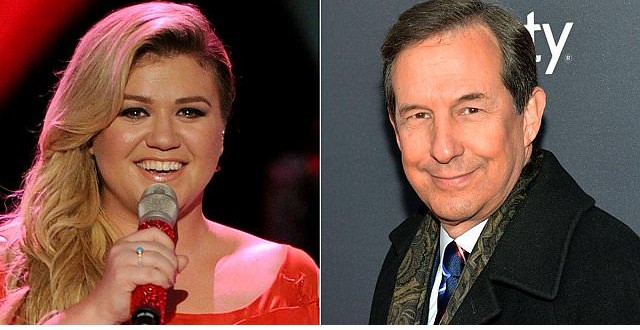 Chris Wallace is facing tons of criticism for his rude remarks on Kelly Clarkson‘s weight during a radio interview on The Mike Gallagher Show.

Which was bad enough.

Chris responded: “Kelly Clarkson’s got a lovely voice. She could stay off the deep dish pizza for a little while.”

Kelly’s fans have hit out at the pair, with one writing on Twitter: “Really Chris Wallace?!

While another added: “Kelly Clarkson can always go on a diet, but Chris Wallace will always be a jerk.”

Another wrote: “Okay I was watching American Idol and saw Kelly Clarkson as well. Chris Wallace your an ass for saying what you said. She’s beautiful.”

Clearly outraged, Wallace’s own colleague Greta Van Susteren stood up against him in a shock blog post about his remarks, saying: “This ‘guy snickering’ about her weight is obnoxious.”

She added: “He [Wallace] should apologize.”

It comes after Kelly herself addressed recent comments about her weight while speaking to Ellen DeGeneres on Friday.

She said: “I yo-yo. Sometimes I’m more fit and I get into kick-boxing hard core and then sometimes I don’t. And I’m like ‘I’d rather have wine!’”

Web articles – via partners/network co-ordinators. This website and its contents are the exclusive property of ANGA Media Corporation . We appreciate your feedback and respond to every request. Please fill in the form or send us email to: [email protected]
Previous: Isaiah Washington criticized for saying Chris Rock should ‘adapt’
Next: John St. Jean : Grande Prairie man in critical condition after assault