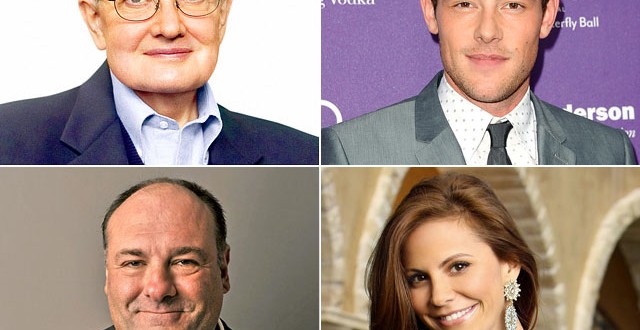 James Gandolfini, Peter O’Toole, Cory Monteith — 2013 saw the loss of many talented stars. Here, we say a final good-bye to the actors, singers, authors and other entertainers who died this year.

1. Mindy McCready– The beautiful country star of the ’00s fatally shot herself on Feb. 17 at the age of 37. The star had been battling major health and legal issues for the past few years. She was found dead on the front porch of her home, which was the same spot where her boyfriend had shot himself a month before. McCready left behind two sons.

2. Lisa Robin Kelly– Kelly, best known for her hilarious portrayal of Eric’s sister Laurie on “That 70s Show,” died on Aug. 14 at the age of 43. She passed away in her sleep. She struggled for years with alcoholism, which had become a bigger issue as of late. Although it was initially suspected that foul play was a factor in her death, it has since been ruled out.

3. Cory Monteith– One of the most shocking celebrity deaths of the year was the passing of the beloved “Glee” star at the age of 31. He struggled with drug addiction for years, and was found dead in a Vancouver hotel room on July 13. His death was due to a mix of heroin and alcohol. His death devastated “Glee” fans as well as his on-screen and real life girlfriend, Lea Michele.

4. Lee Thompson Young– The young actor who starred as detective Barry Frost on “Rizzoli and Isles” committed suicide on Aug. 19 with a self-inflicted gunshot wound. He was 29. He had battled depression for years, and it was later revealed that he had been diagnosed with bipolar disorder and was on medication to treat the ailment.

5. Gia Allemand– The former contestant on “The Bachelor” committed suicide on Aug. 14 at the age of 29. She had recently had a falling out with her boyfriend, NBA star Ryan Anderson. She died by hanging herself with a vacuum cleaner cord while on the phone with her mother. She was admitted to the hospital, but was eventually removed from life support. Her mother later said that Gia suffered from PMS, which often turned violent, which she believes was a factor that led to her death.

6. James Gandolfini– Another shocking death in 2013 was the passing of Gandolfini, who portrayed Tony Soprano on “The Sopranos.” He died of a heart attack while on vacation in Italy on June 19. He was 51. His portrayal of the Italian mob boss has rendered Tony Soprano one of the most iconic television characters of all time. He is survived by two children.

7. Paul Walker– The fans of the “Fast and Furious” franchise were devastated by the death of Walker, who died in a tragic car accident on Nov. 30 at the age of 40. The star of the “Fast and Furious” series was on his way to a charity event when the Porsche in which he was a passenger of spun out of control, killing the driver and Walker. He leaves behind a teenage daughter.

Web articles – via partners/network co-ordinators. This website and its contents are the exclusive property of ANGA Media Corporation . We appreciate your feedback and respond to every request. Please fill in the form or send us email to: [email protected]
Previous: Priyanka Chopra voted Hottest Woman of 2013 (PHOTO)
Next: Climate Change Denial Groups Funded by ‘Dark Money’, research