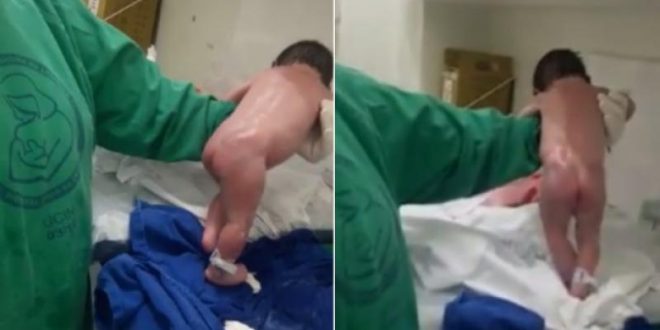 A newborn baby has been filmed appearing to take her first steps just moments after being born in astonishing footage taken inside the delivery room.

The baby seems to be lifting one foot in front of another in the clip, mimicking the movements of walking while being held up by a nurse. The nurse apparently said she was just trying to give the baby a bath.

The viral Facebook post has clearly piqued the interest of viewers with some thinking it is a miracle. Some others, however, have simply dismissed the baby’s movements as a natural “stepping reflex” that all babies are born with.

According to the University of Rochester Medical Center, one of the reflexes that a normal baby should be born with is the walk or dance reflex. According to its website, “a baby appears to take steps or dance when held upright with his or her feet touching a solid surface,” and it is believed to last for about two months after birth.

According to the NHS, a baby normally begins to walk alone at about 10-18 months.

While many were stunned by the video, others expressed concern and seemed furious about what they thought was the hospital staff’s unprofessional approach to holding a newborn.

“This is 100% normal and present in all healthy babies to varying degrees. They are checked for these reflexes before leaving the hospital,” one Facebook user commented, adding that “The hold the nurse has on the baby is unprofessional.”

“This is child cruelty…”, wrote another.

“Why don’t they quit getting their amusement out of the baby and go put him/her on mother’s chest so they can bond and baby feels safe,” another viewer shared, while another added, “Omg I’d have been p****d if they did this too him! Not good for his legs, it’s a natural reflex, and he’s searching for his mother and to breastfeed, skin to skin contact.”

Several viewers tried to explain that the baby’s steps were normal.

“No miracle!! We were all born able to do this!!The walking or stepping reflex is present at birth, though infants this young cannot support their own weight,” a viewer wrote.

Web articles – via partners/network co-ordinators. This website and its contents are the exclusive property of ANGA Media Corporation . We appreciate your feedback and respond to every request. Please fill in the form or send us email to: [email protected]
Previous: Ben Stiller And Christine Taylor separate after 17 years of marriage
Next: Young woman dies after falling off cliff at Rattlesnake Point in Milton