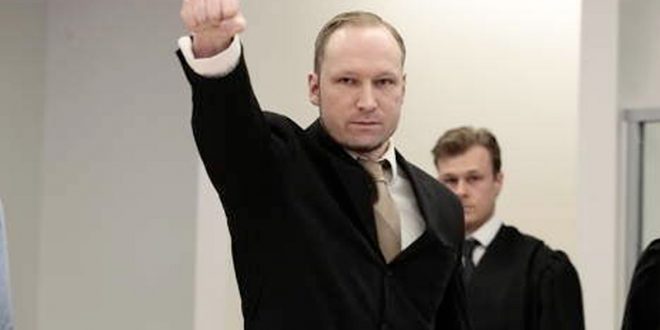 Anders Behring Breivik lost a human rights case on Wednesday when an appeals court overturned a lower court verdict that his near-isolation in a three-room cell was inhuman.

A Norwegian appeals court on Wednesday ruled that mass murderer Anders Behring Breivik had not been treated “inhumanely” while being held in isolation in prison, overturning a previous ruling by a lower court.

“The court has come to the conclusion that Anders Behring Breivik is not, and has not, been subjected to torture or inhumane or degrading treatment,” the Oslo court said in its verdict.

“There are no clear indications that Breivik has been subjected to isolation damage during his prison sentence,” the court found. “The court is of the opinion that there is a high risk that Breivik will resort to violence in the future.”

In December 2015, Breivik filed a lawsuit against the Norwegian government for allegedly breaching articles of the European Convention on Human Rights, specifically those prohibiting inhuman treatment and torture in prison.

He has been held in solitary confinement at Norway’s high-security Skien prison since his conviction in 2012.

Prison authorities have allowed visitors, although Breivik denied such requests unless the prospects publicly express support for neo-Nazi causes. However, authorities have prohibited contact with right-wing sympathisizers.

The Oslo District Court last year ruled that the government had violated Article 3 of the convention, which prohibits “inhuman or degrading treatment or punishment.”

“The prohibition of inhuman and degrading treatment represents a fundamental value in a democratic society. This applies no matter what – also in the treatment of terrorists and killers,” the court said in April 2016.

The April ruling forced the Norwegian state to “pay the plaintiff’s legal fees.” However, Wednesday’s ruling overturns the lower court’s verdict, effectively annulling the government’s responsibility to cover the fees.

Breivik’s attorney said the case could be appealed to the European Court of Human Rights in Strasbourg.

On July 22, 2011, Breivik killed eight people in a bomb attack outside a government building in Oslo. He later traveled to a youth camp on the island of Utoya, run by the left-leaning Labor Party, and opened fire, killing 69 people, many of them children.

Breivik was sentenced in 2012 to 21 years in prison for a series of attacks that left at least 77 people dead. His incarceration can be extended if he is deemed to be a threat to the public.

Web articles – via partners/network co-ordinators. This website and its contents are the exclusive property of ANGA Media Corporation . We appreciate your feedback and respond to every request. Please fill in the form or send us email to: [email protected]
Previous: Are aliens invading Australia? ‘UFO’ burns across the Tasmanian morning sky
Next: Spacex To Send Two Tourists Beyond The Moon Next Year