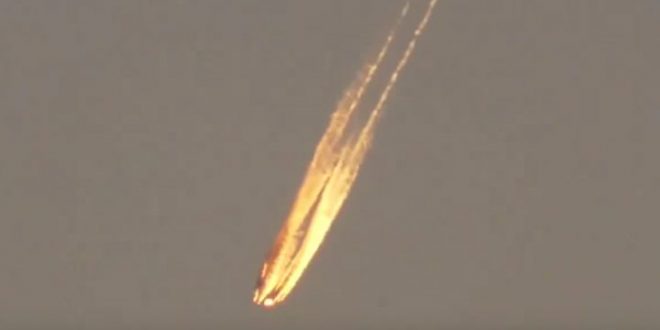 An unknown burning object flying across the sky has sent the internet buzzing over what it is.

Lee-Anne Peters captured footage of the object over Hobart, on the Australian island of Tasmania on Tuesday.

Airservices Australia tried to calm the masses that witnessed the suspected extra-terrestrial phenomenon, saying it was nothing more than a commercial aircraft passing through clouds with the early morning sunlight highlighting its contrails, ABC reports.

David Finlay, from Australian Meteor Reports, said he had not received any reports of meteor activity over Tasmania.

“It is not uncommon for people to mistake jet contrails for meteors, especially in the afternoon and in the western sky as the sun sets. I’ve watched some people looking at contrails who even thought they were seeing a comet,” Mr Finlay said.

After watching video footage of the “meteor” taken by Hobart resident Lee-Ann Peters, Mr Findlay said: “A beautiful video of an A380 contrail.”

Another poster on Facebook said he could confirm via Flight Radar 24 that an Emirates Airbus A380 passed directly over Hobart at 6.30am — the time the object was seen — bound for Auckland.

Others suggested it was from the International Space Station, which actually flew over last night.

Web articles – via partners/network co-ordinators. This website and its contents are the exclusive property of ANGA Media Corporation . We appreciate your feedback and respond to every request. Please fill in the form or send us email to: [email protected]
Previous: Police marksman accidentally injures two at Francois Hollande speech (Video)
Next: Anders Behring Breivik Loses Human Rights Case against Norway