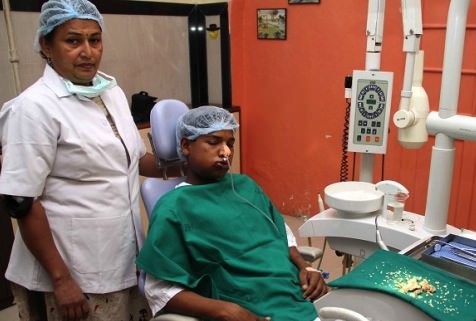 Surgeons in Mumbai removed 232 teeth from the mouth of Indian teen, Ashik Gavai, and it may just be a new world record.

Gavai, 17, went to JJ Hospital in Mumbai on Monday with a swollen right jaw, according to The AFP. Doctors later learned the boy had complex odontoma, a condition in which “the various odontogenic tissues appear in a haphazard arrangement that bears no resemblance to teeth.”

Sunanda Dhivare-Palwankar, head of dentistry in JJ Hospital said multiple pear-like teeth were found inisde the jaw bone of the young boy when the surgery started.

The doctors also found a larger “marble-like” structure that they struggled to shift and eventually had to “chisel out” and remove in fragments.

Garvai had been suffering from disease for 18 months as it slowly began to cause severe pain and dominate the boy’s appearance.

He was taken to Mumbai for treatment after local doctors in the village could not figure out to identify the cause of the problem.

The dental department in JJ hospital has decided to alert Guinness World Record officials, as they believe that the removal of 232 teeth from the mouth of a teenager is a world-record operation.

Web articles – via partners/network co-ordinators. This website and its contents are the exclusive property of ANGA Media Corporation . We appreciate your feedback and respond to every request. Please fill in the form or send us email to: [email protected]
Previous: Astronaut Sees Israeli-Gaza Conflict from Space (Photo)
Next: Christiane Farazli : Dirty doc hit with some bitter medicine