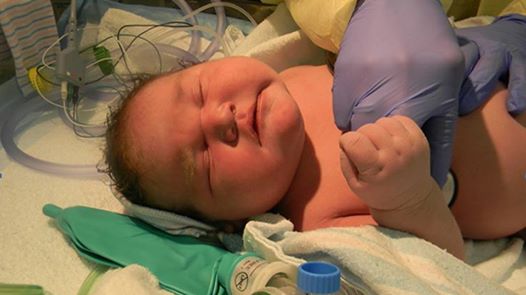 A woman in California almost didn’t believe doctors when she gave birth to her son, Andrew Jacob Cervantez, last week.

That’s because he weighed in at 15 pounds, 2 ounces, according to Daily Mail. Andrew was 24 inches long. He was delivered via cesarean section.

According to Daily Mail, Andrew is thought to be the heaviest baby born in California.

‘I couldn’t even believe it,’ Cervantez told Victor Valley Daily Press. ‘They had to double check because I didn’t believe them; I thought the machine was broken.’
The heaviest baby ever was 23 lb, 12 oz and born to Canadian giantess Anna Bates in 1879. But while Bates measured over 7 feet, Cervantez is a much more modest 5’1″.

The mother of two said that her other children were also heavy at birth, weighing 10 lb, 10 oz and 9 lb, 14 oz respectively, but she hadn’t expected to deliver a baby the size of Andrew Jacob.

‘None of the doctors have ever delivered or heard of a baby being born that big here,’ Cervantez, who is married to 29-year-old Daniel Cervantez, explained to the Daily Press.

The heaviest surviving baby ever recorded was born in Italy in 1995 and weighed a stupendous 10.2kg, according to Guinness World Records.

Australia’s heaviest ever baby was Stephen Lyttle, who weighed in at 7.399kg when he was born in 1963.

Web articles – via partners/network co-ordinators. This website and its contents are the exclusive property of ANGA Media Corporation . We appreciate your feedback and respond to every request. Please fill in the form or send us email to: [email protected]
Previous: “Ride Along” Comedy Breaks Box Office Records ($14.5m)
Next: Vancouver Canucks, Calgary Flames : Eight ejected after brawl 2 seconds into game