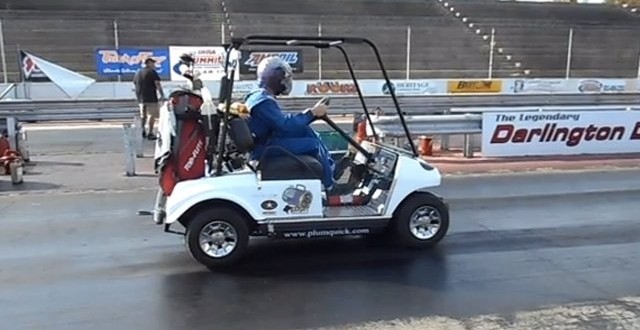 This may not be the world’s coolest golf cart. And it certainly isn’t the best golf-themed crime-thwarting vessel. But we can say without a doubt, this right here is the world’s fastest golf cart.

The Plum Quick Racing team set out to conquer the “Golf Cart World Speed Record” (because that’s a thing) at Darlington Dragway in South Carolina last Friday, and they accomplished just that, setting the new Guiness World Record at 118.76 mph, topping the old record of 103.65 mph quite easily.

Founded in 1981 by Carson Steen and his two sons, Rick and Robby, Plum Quick Motors is a Fort Mills, S.C.-based company that produces “high performance golf cart motors for a variety of applications,” including golfing, hunting and racing.

The Steens began drag racing golf carts in 2008 as a way to test products and promote the Plum Quick brand, but it wasn’t until 2013 that they petitioned Guinness to open a “Fastest Golf Cart” category. They set an initial mark at 103.65 mph in October 2013 and have been working to beat it since.

Web articles – via partners/network co-ordinators. This website and its contents are the exclusive property of ANGA Media Corporation . We appreciate your feedback and respond to every request. Please fill in the form or send us email to: [email protected]
Previous: Marijuana Legalization : Oregon, DC voters OK use of pot
Next: Amazon.ca Launches Same-Day Delivery In Toronto And Vancouver