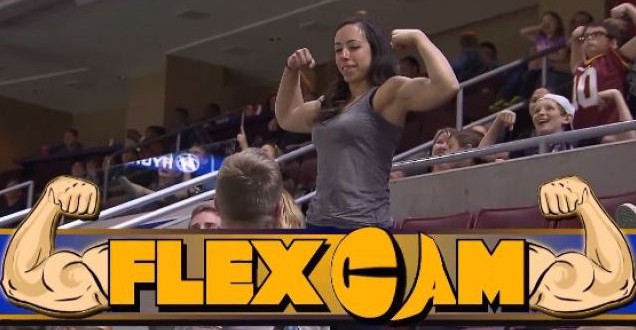 During a ‘Flex Cam’ break during the Philadelphia’s Soul game, a woman shut down an unsuspecting man by showing off her muscles.

That’s the name of the game for Philadelphia Soul fans on ‘Flex Cam’ in the American Arena Football League (AFL).

So when the camera fell on one guy he thought his 15 seconds of fame had finally come.

Bulging arms proudly on show, he was cock of the walk…until a woman behind him muscled in with biceps that could take down a buffalo…

You can even hear the announcer shouting “You’ve been stoned my brother!”

Web articles – via partners/network co-ordinators. This website and its contents are the exclusive property of ANGA Media Corporation . We appreciate your feedback and respond to every request. Please fill in the form or send us email to: [email protected]
Previous: Omar Khadr wins freedom for first time in 13 years
Next: ‘Price is Right’ contestant wins trip to Edmonton (Video)