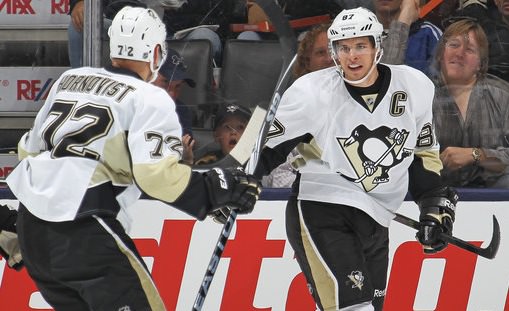 Centers Sidney Crosby and Evgeni Malkin each scored a goal and added two assists as the Pittsburgh Penguins defeated the Toronto Maple Leafs 5-2 on Saturday night.

Patric Hornqvist netted one tally and set up another while Chris Kunitz and Brandon Sutter also scored for the Penguins, who outshot the Maple Leafs 41-25. Defenseman Kris Letang added two assists and Marc-Andre Fleury made 23 saves.

Joffrey Lupul and Tyler Bozak tallied for the Maple Leafs, who dropped both of their first two home games and visit the New York Rangers on Sunday. Jonathan Bernier stopped 36 shots.

Hornqvist opened the floodgates 6:44 into the first period and Crosby added a power-play goal a minute later. Kunitz tipped Crosby’s shot past Bernier during another man advantage with 2:14 remaining in the session to give Pittsburgh a 3-0 lead.

Lupul converted a feed from defenseman Morgan Rielly 4:18 into the second period to get Toronto on the board, but Malkin responded with a power-play goal of his own 9:28 later. Sutter made it 5-1 at 8:26 of the third, but Bozak capitalized on a man advantage with 9:09 remaining to get the Maple Leafs back within three.

GAME NOTEBOOK: Maple Leafs rookie D Stuart Percy assisted on Bozak’s goal, giving him points in his first two NHL games. … Pittsburgh finished 3-for-5 on the power play while Toronto was 2-for-5. … Crosby has collected 46 points in 29 career games against the Maple Leafs.

Web articles – via partners/network co-ordinators. This website and its contents are the exclusive property of ANGA Media Corporation . We appreciate your feedback and respond to every request. Please fill in the form or send us email to: [email protected]
Previous: Suge Knight Shooter Reportedly Identified By Police, Report
Next: Car seat errors widespread among new parents, New Study