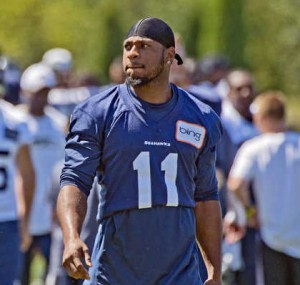 For the last 10 weeks, fantasy football owners have been patiently awaiting the return of several key players. One of them being Seahawks WR Percy Harvin. For a little over the first half of the NFL season, Harvin has been recovering from hip surgery. He’s finally set to make his long-awaited debut this weekend.

What Harvin’s role will be this week against the Vikings and the rest of the year is a toss up. The Seahawks win with the run and the play of their dominant secondary. It’s hard for me to see Marshawn Lynch losing his continuing momentum with Seattle in first place. Is Harvin worth owning in all leagues? Absolutely. He could and should be the duel threat that made him famous in college and with the Vikings. But whether he will live up to that offseason WR1 hype is too much to ask for. Russell Wilson has completed 163 passes this year. That’s a mere 16.3 per game.

He’s not built to throw more than 20-25 passes a contest. That means someone is going to lose out on targets. Golden Tate, who’s been on fire recently, could be the biggest loser. Because of that, he’s one of our Sell High candidates for this week.

Web articles – via partners/network co-ordinators. This website and its contents are the exclusive property of ANGA Media Corporation . We appreciate your feedback and respond to every request. Please fill in the form or send us email to: [email protected]
Previous: Brazilian woman 1 centimeter away from death : harpoon victim photo
Next: Pittsburgh shooting : possibly linked to drugs