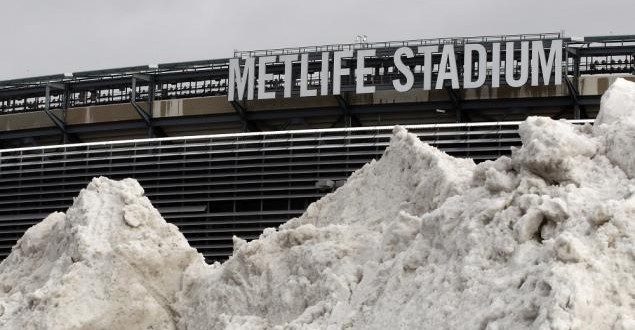 NFL could reschedule Super Bowl in case of snow

NFL could reschedule Super Bowl in case of snow : Officials

There’s been a lot of objection to next year’s NY/NJ Super Bowl—because weather scares football players—but the NFL has a solution if there’s a crazy blizzard: Just reschedule the Super Bowl!

Right now, the Super Bowl is planned for Sunday, February 2, 2014. According to the NY Times, “The National Football League has contingency plans for something that has never been done before: move the game up to Saturday or delay it to Monday if forecasts — or an actual storm — made Sunday unplayable.” Would this mean another week of a Times Square lockdown?

At the press conference, New Jersey Department of Transportation Deputy Commissioner Joseph Mrozek said the state can deploy more than 820 vehicles and about 60,000 tons of salt within a 30-mile radius of the stadium, with even more resources available statewide if necessary.

The state also has more than a quarter of a million gallons of brine and 850,000 gallons of liquid calcium in storage, which are used to treat salt when temperatures drop below freezing.

Interest in whether or not America will have its first snowy Super Bowl has ramped up so much that the forecasting company AccuWeather has created a website asking that very question: www.willitsnow.com.

Launched on Wednesday, exactly 45 days before the game, the site currently predicts a 30 percent chance of snow on Feb. 2. The site will be updated daily.

On Super Bowl Sunday, it’ll update with hourly forecasts for fans who want to track the weather by the minute.

Web articles – via partners/network co-ordinators. This website and its contents are the exclusive property of ANGA Media Corporation . We appreciate your feedback and respond to every request. Please fill in the form or send us email to: [email protected]
Previous: Bette Davis: Icon of the Silver Screen
Next: Worst celebrity wardrobe malfunctions of 2013 (VIDEO)