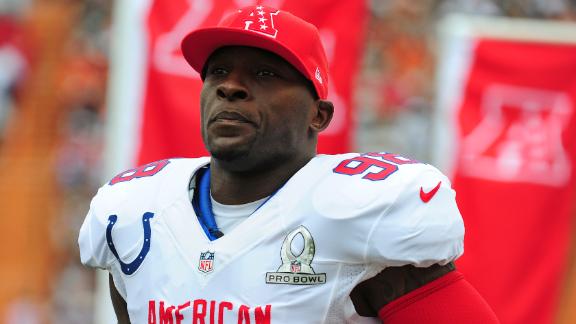 Current AFC Defensive Player of the Year and former Alabama A&M Bulldog Robert Mathis has been suspended the first four games of the 2014 season for violating the league’s policy on performance enhancing substances.

The NFL did not say what substance Mathis may have been using, but Mathis released the following statement on Twitter. It appears in its entirely below:

It is difficult for me to address the circumstances surrounding this suspension because they involve very personal medical information, but it is very important to me that my fans, particularly young people, understand what did and did not occur. Like many families, my wife and I faced fertility challenges, and I sought medical assistance. I specifically asked the doctor if the medication he prescribed for me would present a problem for NFL drug testing, and unfortunately, he incorrectly told me that it would not. I made the mistake of not calling the NFL or NFLPA to double check before I took the medication at the end of last season. The union has worked very closely with me to present all of the facts and medical records for consideration of discipline that does not include a suspension because of the unique facts of my case, but the Commissioner refused the request. I am deeply saddened that this situation will prevent me from contributing to my team for four games, and I regret that I didn’t cross check what my doctor told me before I took the medication. I hope that my fans will understand the unique circumstances involved here and continue to know that I am a man of integrity who would never intentionally circumvent the performance enhancing substance policy agreed to by the NFL and my union. The incredible blessing of this very upsetting situation is that, after I took the medication very briefly at the end of last season, we learned that my wife is expecting a baby. We are thrilled that we will be welcoming a new member in several months, but I apologize to my teammates, coaches and Colts fans that I will not be able to contribute to my team for the first four weeks of the 2014 season. I will work extremely hard during that time to stay in top football shape and will be prepared to contribute immediately upon my return.

The Colts released a statement as well, calling Mathis an “honored and cherished” player and showing the organization’s support for him. The NFL Players Association also expressed support for Mathis, saying NFL Commissioner Roger Goodell’s decision to suspend Mathis “shows a lack of compassion and perspective.”

Web articles – via partners/network co-ordinators. This website and its contents are the exclusive property of ANGA Media Corporation . We appreciate your feedback and respond to every request. Please fill in the form or send us email to: [email protected]
Previous: Sherri Shepherd : Actress fighting both ex-husbands for custody
Next: War on Boko Haram: African, Western nations unify in hunt for Nigerian girls(+video)