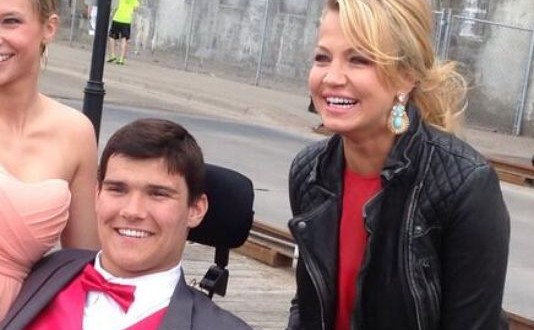 Many celebrities are invited to proms every spring. Some accept. Few end up actually going. ESPN’s Michelle Beadle deserves credit. The SportsNation host was invited to prom by Jack Jablonski, a former Minnesota high school hockey player who was paralyzed from the chest down after suffering a hit during a game, last month. Today, she and Jack are off to the dance.

“This is ending high school with a hurrah,” Jablonski told KARE 11. “I can’t thank Michelle enough for coming tonight.”
On Friday, Beadle had dinner with the Jablonskis.

Bacon for days with the Jablonskis. I love your parents, @Jabs_13!!!! pic.twitter.com/dMekz7fJWz

She also participated in the school’s grand march and evening of events, KARE 11 says.
As for Beadle, she was a little nervous getting ready for prom.

I'm a 38 year old getting ready for prom. My hair will be slightly smaller and my bum slightly bigger. And I'm also nervous. What?!?!

“I’m happy that the school actually allowed me because I know they’re very, they’ve got some really good rules here. And, so it’ll be fun. I get to go on a school bus. Hello, it’s going to make me young again,” Beadle told WCCO.

“Jack is a just a cool human being,” Beadle told KARE 11. “To go through what he’s gone through and to keep smiling, it’s just a no-brainer that I would want to hang out.”
Jablonski will graduate from Benilde Saint Margaret High School next month.

Web articles – via partners/network co-ordinators. This website and its contents are the exclusive property of ANGA Media Corporation . We appreciate your feedback and respond to every request. Please fill in the form or send us email to: [email protected]
Previous: At least 17 killed as tornadoes strike southern US : Officials
Next: 2 men, 2 youths charged in alleged sexual assault on a child