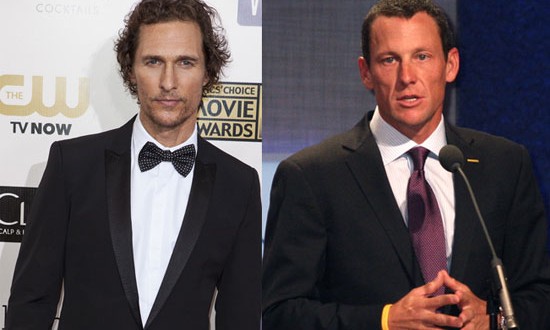 After Lance Armstrong admitted to doping, his longtime friend and fitness partner Matthew McConaughey was really upset that the cyclist lied about using performance enhancing drugs.

Last week Armstrong opened up to Oprah Winfrey and admitted he had been lying for over 14 years about the banned substances he had taken to help him win cycling races.

Several months ago officials at the United States Anti-Doping Agency stripped the athlete of his seven Tour De France titles and banned him from the sport.

Nevertheless, when he heard that Armstrong had confessed to Oprah, the star felt anger and then sadness, and only afterwards a sense of relief for him.

“My first reaction was I was [upset]. I was mad. I then got kind of sad for him. First off, I had a part of me that took it kind of personally, which I think a lot of people have,” the actor told MTV.

It was only afterwards, after the initial shock wore off, that he could see that Lance had no other choice but keep him – and all his other friends – in the dark about his huge secret.

“What I mean by this is, what was he supposed to do? Call me to the side and go, ‘Hey man, I did it but don’t tell anybody.’ Then I would have really had a reason to be [upset] at him, going, ‘You want me to walk around holding this?’” the actor said.

At the end of the day, Matthew admits that, from a purely unselfish point of view, he’s happy for Lance that he’s finally found it in himself to speak out and reveal a secret that he’d been carrying with him for over a decade.

Yes, Matthew adds, things are only going to get worse before they get better, and Armstrong probably knows it as well.

“Where I am now is I’ve put myself out of the way and I am happy for this guy, who has now chosen to reenter this new chapter of his life a truly free man. And the weight he had on his shoulders, without the boogieman under the bed, the skeleton in the closet that he’s carried for 14 years. Fourteen years he lied and carried the lie with him,” the actor says.

Web articles – via partners/network co-ordinators. This website and its contents are the exclusive property of ANGA Media Corporation . We appreciate your feedback and respond to every request. Please fill in the form or send us email to: [email protected]
Previous: Katy Perry avoiding Rihanna because of Chris Brown : Celebrity feuds
Next: Tori spelling calls katie holmes is ‘plastic’, ‘can’t sing’