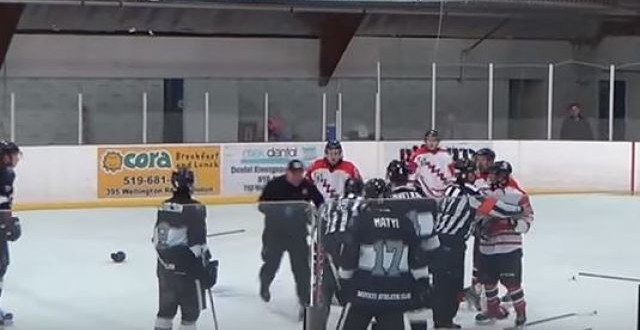 When it comes to junior hockey in Canada, things can get a little crazy from time to time, and a recent Greater Metro Junior A Hockey League game is the perfect example of the situation getting just a bit out of hand.

The teams, who are part of the Greater Metro Junior A Hockey League, got into a typical hockey brawl, notes CBSSports.com.

However, after the original melee was over, a referee appeared to slug and knock Lakers player Michael Wooley down on the ice, reports The Hockey News.

Lakers player Jonathan DaSilva skated over, but got a hand in his face from the same referee.

Then the Lakers trainer came out on the ice and took down the referee. The trainer was subsequently escorted off the ice by two other referees.

There were 57 total penalty minutes and eight players kicked out of the game, which concluded with the Kings winning 6-3.

Web articles – via partners/network co-ordinators. This website and its contents are the exclusive property of ANGA Media Corporation . We appreciate your feedback and respond to every request. Please fill in the form or send us email to: [email protected]
Previous: MS Cancer Treatment: Multiple sclerosis patients may walk again
Next: Former WWE Star “Iron” Mike Sharpe Dies At Age 64