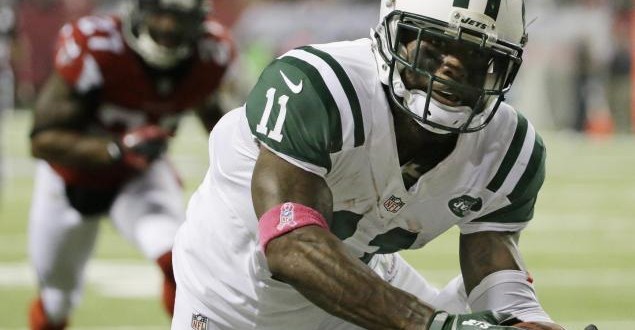 The Jets signed Dwight Jones to their practice squad Wednesday, a wide receiver who is returning to football after a family tragedy. Jones went undrafted in 2012 after coming out of North Carolina and signed with the Houston Texans.

But Jones didn’t report to training camp that season, telling the Texans he wasn’t sure if we wanted to play football again and was placed on the reserve/did not report list.

“I didn’t want to play football,” Jones said. “I didn’t feel like it.”
Jones said many people did not realize that was the reason he was walking away.

“My son was born real sick,” Jones said. “A lot of people didn’t understand my story. They just thought I quit football. I didn’t just quit football. My son was real sick, and God put a burden on me not to play football at that time. God has given me that feeling back that I love football.”

Jones worked out for the Jets on Tuesday and was signed. He practiced Wednesday for the first time in more than a year. Now, he’s hoping to land a spot with the Jets for next year.

“Once I get the rust off I feel like I can get back into football mode,” he said. “I left some plays out there on the field today. I’m disappointed in myself. I made a big play at the end. … I see myself contributing to the team next year.”

Jones said he dropped to his knees on Tuesday after his workout to thank God for getting him here.

“I’m here,” he said. “God works in mysterious ways. A lot of people doubted me, said they thought I was done. I went out there today and to go against [Antonio] Cromartie, one of the best corners in the NFL, that was a fun challenge. I’m just happy to be back playing.”

Jones had a monster 2011 season for the Tar Heels, catching 85 passes for 1,196 yards and 12 touchdowns. If he can find that form again, he has a good chance of at least getting a look this spring from the Jets.

Web articles – via partners/network co-ordinators. This website and its contents are the exclusive property of ANGA Media Corporation . We appreciate your feedback and respond to every request. Please fill in the form or send us email to: [email protected]
Previous: Eagles honor NFL cheerleader who served in Afghanistan
Next: Lingerie : Christmas knickers made from pine needles