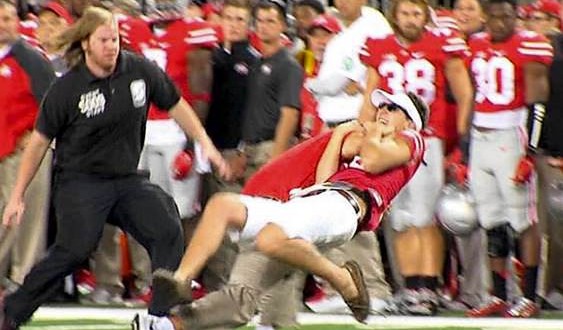 Anthony Schlegel recorded a tackle on the Ohio Stadium field tonight for the first time since 2005.

Anthony Schlegel’s move might have been the best defensive play of the game.

Anthony Schlegel, who is a conditioning coach at Ohio State, intercepted the fan who ran on the field. As the fan was running away from security personnel, Schlegel wrapped his arms around him and threw him to the turf.

The fan was led off the field as Buckeyes players and team personnel congratulated Schlegel on the sideline not far from where he made the tackle.

Coach Urban Meyer was asked about Schlegel’s hit on the unsuspecting interloper.

He just laughed and walked back into the locker room.

This picture of OSU coach Anthony Schlegel bodyslamming a fan on the field (via @atomicphoto) http://t.co/nQLMSitqd6 pic.twitter.com/LoDkkpYXaJ

Web articles – via partners/network co-ordinators. This website and its contents are the exclusive property of ANGA Media Corporation . We appreciate your feedback and respond to every request. Please fill in the form or send us email to: [email protected]
Previous: William Shatner : Actor confirms Star Trek 3 approach
Next: XS Cargo fails to restructure, starts liquidating 50 stores : Report