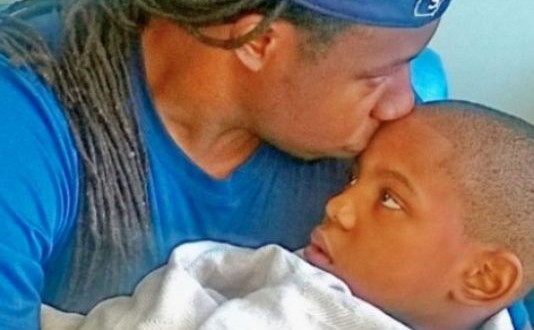 At that time, Adrian and his wife Angela were told the survival rate for their son’s cancer was just 5-9%. They set up a gofundme page to help raise money for A.J.’s treatment and it has raised nearly $40,000.

When A.J. was 7, the Village of Round Lake, along with help from the Make-A-Wish Foundation, granted A.J.’s wish to become a police officer. It was just last month when A.J. was able to dress in a full police uniform and be sworn in as an honorary Round Lake Police officer.

Adrian Peterson played for the Bears from 2002-2009 after being a 6th round draft pick from Georgia Southern. He was a popular player during his time in Chicago, known for his work ethic and hard running style.

Web articles – via partners/network co-ordinators. This website and its contents are the exclusive property of ANGA Media Corporation . We appreciate your feedback and respond to every request. Please fill in the form or send us email to: [email protected]
Previous: Nicole DuFault : Teacher charged with sex acts on 6 teen boys
Next: Transgender SFU students demand inclusive washrooms