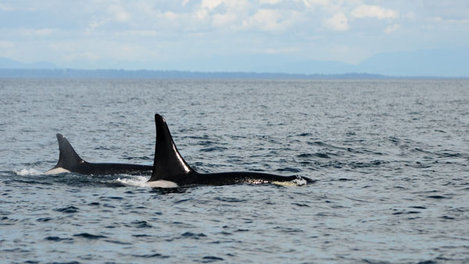 Whale researchers had an extra happy Mother’s Day on news that the world’s oldest known orca has survived another year.

J2, also known as “Granny,” estimated by The Center for Whale Research to be 103 years old, was sighted Friday by Pacific Whale Watch Association crews.

The elderly whale was seen by Captain Simon Pidcock of Ocean EcoVentures in Cowichan Bay on Friday, May 9. Pidcock told The Province that he was able to identify Granny by a distinctive “half-moon-shaped notch on the trailing side of her dorsal fin.”

“She looked really healthy, still going strong,” Pidcock said. “We’re really excited to have her back.”

Granny is part of the southern resident whale population, which is made up of three pods, or groups, of whales: J, K, and L. Granny is the matriarch of J-pod, which has 25 members.

According to The Province, the southern residents “inhabit the coastal waters from Haida Gwaii to Northern California for about eight months of the year.”

This population of killer whales is known for their long lifespans. A female whale named K7 died in 2008 at the age of 98 and the female L25 is thought to be 85 years old, Harris said in a statement.

At the most recent sighting, Harris told The Province that Granny and her pack (which includes her great-grandchild) had just completed an 800-mile swim from California in less than eight days. “The thing I found really, really interesting is that she’s in the shape to travel, to make the trek she just did with J-Pod,” he said.

Web articles – via partners/network co-ordinators. This website and its contents are the exclusive property of ANGA Media Corporation . We appreciate your feedback and respond to every request. Please fill in the form or send us email to: [email protected]
Previous: Lac-Megantic: Charges brought in Quebec railway disaster – Update
Next: Nigeria Ready To Talk To Boko Haram Rebels