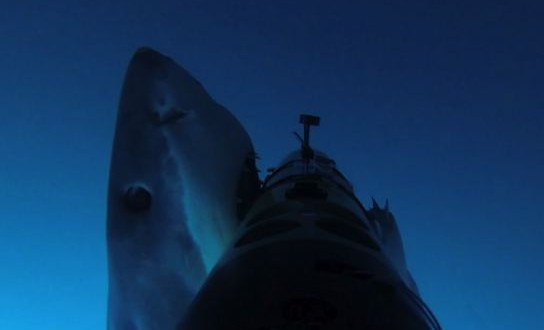 Maybe you enjoyed livetweeting Sharknado 2 last week, but sometimes science does Hollywood one better. This video from the Woods Hole Oceanographic Institute shows you how just terrifying it actually is:

Footage from multiple views around the device show the SharkCam under water. Suddenly, a shark comes up from beneath it and snapping its powerful jaws closed on the device, sinking its razor sharp teeth in and clamping down. There’s also equally chilling footage that shows a shark approaching the camera head-on before biting in.

Researchers who examined the device afterward were amazed at the damage the device had sustained.

Scientist Greg Skomal says he’s been studying sharks for 30 years and has never before seen this type of behavior.

“Almost all of our observations of white sharks attacking anything occur at or near the surface,” Skomal said. “Here we have observations that are occurring down at 300 feet deep.”

“That’s never ever been seen before,” he said.

The footage may give valuable insight into how and why sharks attack.

On Saturday, a young boy was bitten by a shark at a Florida beach. And in Manhattan Beach, Calif., Steve Robel was attacked by a Great White while on a morning swim on the July 4 weekend. The attack was caught on camera.

Viewers can learn more about the 2013 trip to Guadalupe Island next week on the Discovery Channel’s Shark Week, an annual event during which one week is dedicated to programming focusing on sharks.

Web articles – via partners/network co-ordinators. This website and its contents are the exclusive property of ANGA Media Corporation . We appreciate your feedback and respond to every request. Please fill in the form or send us email to: [email protected]
Previous: Health, engineering degrees have best return : Report
Next: NASA : Mars Orbiter Moved to Evade Space-dust From Comet