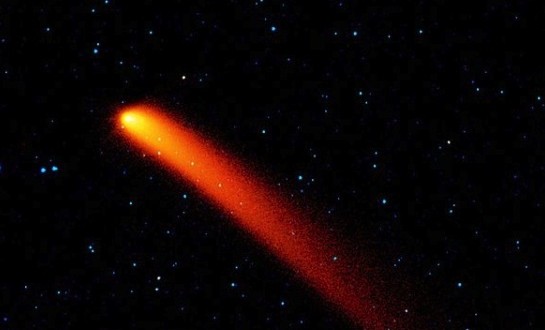 NASA will alter the orbital pathway of its $297 million Mars Odyssey orbiter on Tuesday in an effort to remove it from the danger zone of a super-speed dust from a massive comet that will fly very close to the Red Planet on Oct. 19.

NASA already made one unannounced change to the path of its other Mars spacecraft, the Mars Reconnaissance Orbiter, and it plans to carry out a final maneuver on Aug. 27.

The danger comes from Comet C/2013 A1 Siding Spring, which was discovered in January 2013 and is estimated to be about half a mile in size.

Mars scientist Richard Zurek said the orbiters won’t be in the direct path of the oncoming space boulder, but they could accidentally meet up with its trail of dust: particles that are roughly the size of grains of sand that are traveling around 35 miles per second. (By contrast, a bullet from an average 9 mm handgun travels at about 1,400 feet per second.)

“That’s like a cannonball for our spacecraft,” Zurek said. One piece of debris at that speed could rupture an orbiter’s fuel line or take out its electronics, he says.

The comet poses no threat to us Earthlings.

Currently, NASA has two orbiters circling Mars with a third expected to arrive in September.

NASA’s Mars Atmosphere and Volatile Evolution (MAVEN) spacecraft is on its way to the Red Planet and will enter orbit on Sept. 21. The MAVEN team is planning to change its flight path on Oct. 9.

The goal is to have all three flying safely over the opposite side of Mars when the comet flies by on Oct. 19.

As a bonus, NASA will be able to use the orbiters to study the comet as it passes by the Red Planet.

Web articles – via partners/network co-ordinators. This website and its contents are the exclusive property of ANGA Media Corporation . We appreciate your feedback and respond to every request. Please fill in the form or send us email to: [email protected]
Previous: Watch great white sharks hunt an underwater robot (Video)
Next: Road closed after chemical spill, Police