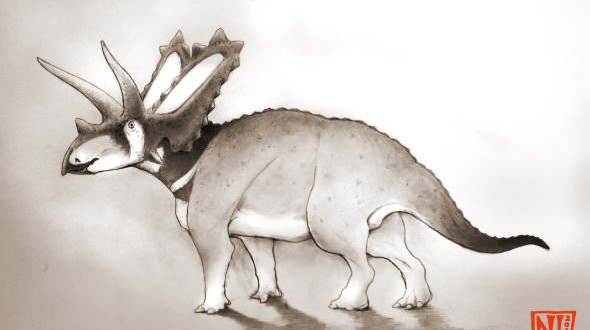 A new species of dinosaur has been discovered by a British palaeontologist.

Dr Nick Longrich was studying fossilised bones from two horned dinosaurs which had been stored at the Canadian Museum of Nature for 75 years.

The bones had been classified as Anchiceratops and Chasmosaurus, species known to be from Canada.

“We thought we had discovered most of the species, but it seems there are many undiscovered dinosaurs left,” said Longrich from the University’s Department of Biology & Biochemistry.

“There are lots of species out there. We’ve really only just scratched the surface,” he said.

Around the size of a buffalo, they were a major group of plant eating dinosaurs in western North America at the end of the Cretaceous Period, around 75 million years ago.

The fossils studied by Longrich were previously classified as Anchiceratops and Chasmosaurus, species known from Canada, but after re-analysing the skeletons, he found they more closely resembled dinosaurs from the American Southwest.

One was closely related to Pentaceratops sternbergii from New Mexico, but is a more primitive species, named Pentaceratops aquilonius. It was smaller, and differed in the shape of the frill and arrangement of the hornlets on the back.

The other seems to be related to Kosmoceratops from Utah. It seems to be a new species as well, but more complete fossils are needed to be certain.

“The distribution of dinosaur species was very different from the patterns seen in living mammals. In living mammals, there tend to be relatively few large species, and they have large ranges,” Longrich said.

“With Cretaceous dinosaurs, we see a lot of large species in a single habitat. They also tend to be very regional – as you move from one habitat to another, you get a completely different set of species,” he said.