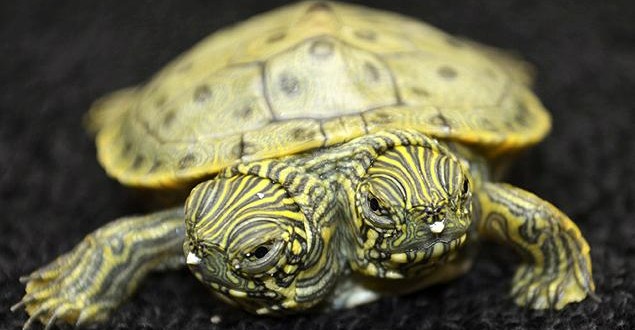 Here’s looking at you … and you!

A two-headed turtle is the latest bizarre animal to attract tourists to San Antonio Zoo.

Thelma and Louise — as the female Texas cooter has been named — made the attraction’s Friedrich Aquarium its new home Tuesday.

She follows in the footsteps of Janus — the two-headed Texas rat snake — who lived in the zoo from 1978 until 1995.

A spokeswoman said it eats and swims, and added that the two heads, named Louise Left and Thelma Right, seem to get along. She said the zoo did not foresee any health issues for the animal.

The Facebook page on Sunday showed photos of the reptile, which hatched on 18 June and is on display at the zoo’s Richard Friedrich aquarium, with imaginary conversations between the two heads.

Craig Pelke, curator of reptiles at the zoo, said that the bicephalic (two-headed) turtle was the result of twins that had not separated. “At this time, Thelma and Louise are doing well on exhibit and eating with both heads,” he said.

Web articles – via partners/network co-ordinators. This website and its contents are the exclusive property of ANGA Media Corporation . We appreciate your feedback and respond to every request. Please fill in the form or send us email to: [email protected]
Previous: Valeria Lukyanova claims to be a spiritual guru
Next: Canada donation matching to Typhoon Haiyan relief