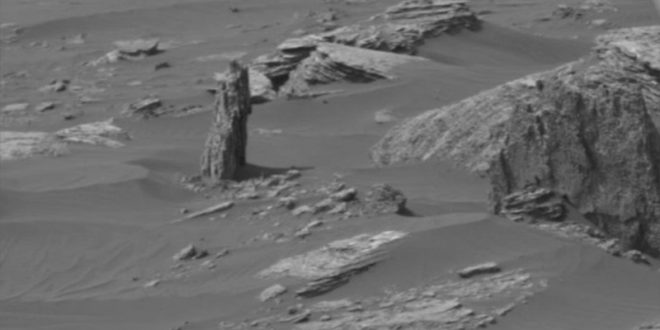 ALIEN hunters have been left doing somersaults amid astonishing claims they have found an alien skull and an ancient tree stump on the surface of mars.

‘This object definitely looks out of place and in my opinion could be the petrified remnants of a Martian tree,’ the alien hunter and YouTuber shared in the video description.

‘Object is around 3 feet in height, and with numerous discoveries of plant and animal life on mars, it would be logical to assume, that a variety of tree either existed, or still exists on this enigmatic planet.’

The video was highlighted by Scott C Waring, editor of ufosightingsdaily.com.

He said: “Paranormal Crucible makes a hypothesis that this could be an ancient tree stump on Mars.

“It’s a good assumption since NASA said Mars was Earth-like when a solar explosion hit the planet, striping the atmosphere and oceans from its surface.”

Mr Waring has been doing his own scouring through Curiosity images and claims to have found a possible alien skull.

He blogged: “Here is an alien skull I found in a Mars photo.

“This skull has dark lines around the eye sockets, just as humans do.

“It has two eye sockets, just as humans do.

“Its nose and mouth area seem to be connected.

“There are two long bones on each side of the mouth area, which could have been part of the jaw area.

Web articles – via partners/network co-ordinators. This website and its contents are the exclusive property of ANGA Media Corporation . We appreciate your feedback and respond to every request. Please fill in the form or send us email to: [email protected]
Previous: Researchers debunk theory that hobbits were man’s cousin
Next: Frito-Lay recalls some potato chips “Report”