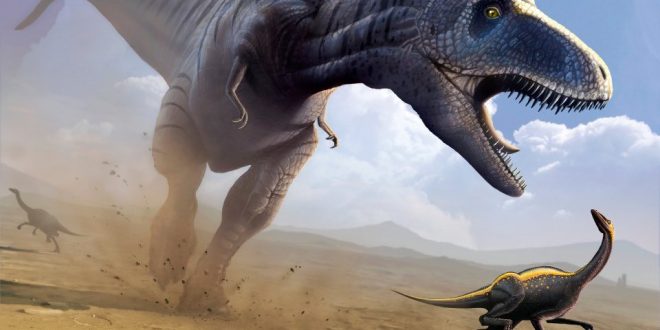 The Tyrannosaurus Rex was one of the scariest killers in the history of Planet Earth.

But its fearsome image was undermined a little by the ridiculousness of its puny arms, which were among the smallest of all dinosaurs when considered proportionally against the size of its body.

Now one researchers has claimed the tiny arms were actually “vicious weapons” equipped with four-inch claws which would have allowed it to eviscerate its unfortunate prey.

Dr Steven Stanley, a palaeontologist at the University of Hawaii in Manoa argues that T-Rex’s arms were more useful than thought.

Speaking at the Geological Society of America Conference in Seattle, Dr Stanley said: ‘Its short, strong forelimbs and large claws would have permitted T. rex, whether mounted on a victim’s back or grasping it with its jaws, to inflict four gashes a metre [three feet] or more long and several centimetres [more than an inch] deep within a few seconds.

‘And it could have repeated this multiple times in rapid succession.’
Dr Stanley has based his theory on T-Rex’s strong arm bones, which at a metre-long, ‘were not as tiny as often portrayed.’

The dinosaur also had an ‘unusual quasi-ball-and-socket-joint’, allowing it to move its arms in several directions – ideal for slashing, according to Dr Stanley.

During its evolution, T-Rex also lost one of its three claws, resulting in 50 per cent more pressure applied by the remaining two, providing a more powerful slash.

Dr Stanley added: ‘In light of its formidable weaponry, why should T. rex not have engaged in this activity?’

But not everyone is convinced by Dr Stanley’s theory.

Speaking to National Geographic, Dr Jakob Vinther, a paelobiologist at the University of Bristol, said: ‘It seems illogical to me to use such small arms to slash with.’

Instead, Dr Vinther suggests that the arms were used for a ‘minor subsidiary purpose,’ such as to clasp a partner during sex.

Web articles – via partners/network co-ordinators. This website and its contents are the exclusive property of ANGA Media Corporation . We appreciate your feedback and respond to every request. Please fill in the form or send us email to: [email protected]
Previous: A1689B11: The most ancient spiral galaxy confirmed
Next: Saudi Arabia: Ballistic missile intercepted near Riyadh airport