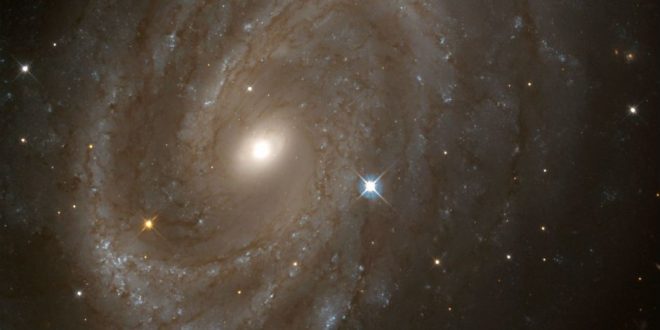 Astronomers have confirmed the age of a spiral galaxy to be 11 billion years old, making it the oldest ever discovered.

The most ancient spiral galaxy discovered to date is revealing its secrets to a team of astronomers at Swinburne University of Technology and The Australian National University (ANU), part of the Australian Research Council Centre of Excellence in All Sky Astrophysics in 3D (ASTRO 3D).

The galaxy, known as A1689B11, existed 11 billion years in the past, just 2.6 billion years after the Big Bang, when the Universe was only one fifth of its present age. It is thus the most ancient spiral galaxy discovered so far.

The researchers used a powerful technique that combines gravitational lensing with the cutting-edge instrument the Near-infrared Integral Field Spectrograph (NIFS) on the Gemini North telescope in Hawai‘i to verify the vintage and spiral nature of this galaxy. NIFS is Australia’s first Gemini instrument that was designed and built by the late Peter McGregor at The ANU.

Gravitational lenses are Nature’s largest telescopes, created by massive clusters composed of thousands of galaxies and dark matter. The cluster bends and magnifies the light of galaxies behind it in a manner similar to an ordinary lens, but on a much larger scale.

“We are able to look 11 billion years back in time and directly witness the formation of the first, primitive spiral arms of a galaxy.”

Co-author, Princeton University’s Dr Renyue Cen, says: “Studying ancient spirals like A1689B11 is a key to unlocking the mystery of how and when the Hubble sequence emerges.

“Spiral galaxies are exceptionally rare in the early Universe, and this discovery opens the door to investigating how galaxies transition from highly chaotic, turbulent discs to tranquil, thin discs like those of our own Milky Way galaxy.”

“This galaxy is forming stars 20 times faster than galaxies today – as fast as other young galaxies of similar masses in the early Universe. However, unlike other galaxies of the same epoch, A1689B11 has a very cool and thin disc, rotating calmly with surprisingly little turbulence. This type of spiral galaxy has never been seen before at this early epoch of the Universe!”

Web articles – via partners/network co-ordinators. This website and its contents are the exclusive property of ANGA Media Corporation . We appreciate your feedback and respond to every request. Please fill in the form or send us email to: [email protected]
Previous: Spicy food could curb salt cravings, says new study
Next: T. rex’s silly-looking arms were built for slashing, says new study