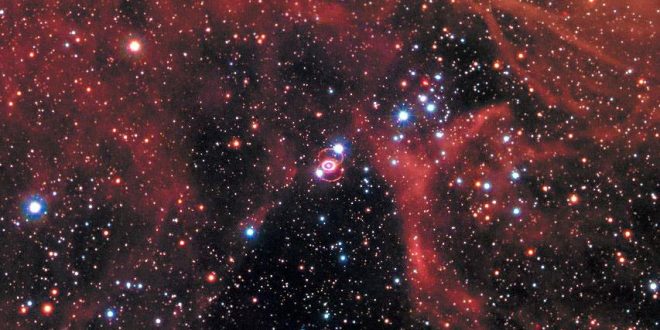 Scientists commemorate one of the brightest supernovae in 400 years with new images and models of this stellar remnant.

Three decades ago, a massive stellar explosion sent shockwaves not only through space but also through the astronomical community. SN 1987A was the closest observed supernova to Earth since the invention of the telescope and has become by far the best studied of all time, revolutionising our understanding of the explosive death of massive stars.

Located in the Large Magellanic Cloud, a satellite galaxy of the Milky Way, Supernova 1987A is the nearest supernova explosion observed in hundreds of years. It marked the end of the life of a massive star and sent out a shockwave of ejected material and bright light into space. The light finally reached Earth on 23 February 1987 — like a cosmic blast from the past.

The NASA/ESA Hubble Space Telescope has been on the front line of observations of SN 1987A since 1990 and has taken a look at it many times over the past 27 years. To celebrate the 30th anniversary of the supernova and to check how its remnant has developed, Hubble took another image of the distant explosion in January 2017, adding to the existing collection.

Because of its early detection and relative proximity to Earth, SN 1987A has become the best studied supernova ever. Prior to SN 1987A, our knowledge of supernovae was simplistic and idealised. But by studying the evolution of SN 1987A from supernova to supernova remnant in superb detail, using telescopes in space and on the ground, astronomers have gained revolutionary insights into the deaths of massive stars.

Back in 1990, Hubble was the first to see the event in high resolution, clearly imaging the main ring that blazes around the exploded star. It also discovered the two fainter outer rings, which extend like mirror images in a hourglass-shaped structure. Even today, the origin of these structures is not yet fully understood.

However, by observing the expanding remnant material over the years, Hubble helped to show that the material within this structure was ejected 20 000 years before the actual explosion took place. Its shape at first surprised astronomers, who expected the dying star to eject material in a spherical shape — but faster stellar winds likely caused the slower material to pile up into ring-like structures.

The initial burst of light from the supernova illuminated the rings. They slowly faded over the first decade after the explosion, until the shock wave of the supernova slammed into the inner ring in 2001, heating the gas to searing temperatures and generating strong X-ray emission. Hubble’s observations of this process shed light on how supernovae can affect the dynamics and chemistry of their surrounding environment, and thus shape galactic evolution.

Web articles – via partners/network co-ordinators. This website and its contents are the exclusive property of ANGA Media Corporation . We appreciate your feedback and respond to every request. Please fill in the form or send us email to: [email protected]
Previous: Researchers train bumblebees to score goals with tiny footballs for treats (Video)
Next: Scientists Offer Remedy for Women’s ‘Orgasm Gap’