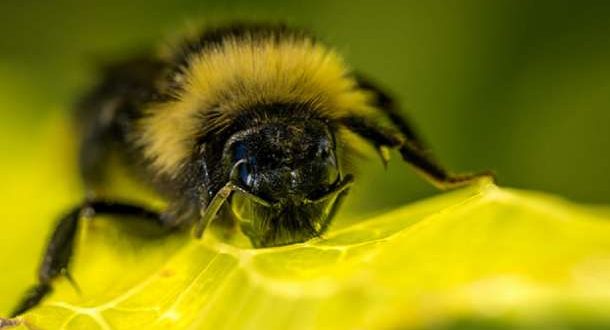 Scientists at Queen Mary University of London trained bees to roll a ball into a goal by rewarding them with sugar water.

First, they taught the insects the correct location for the ball, then taught them how to move a ball from a different location to the desired area in order to obtain their reward, they explained in a statement.

Once the bees were trained that the ball had to be in the correct location before they would get sugar water, they were shown three yellow balls placed at various distances from the target, said Science. Some of the bees watched as a scientist used magnets to move the ball farthest from the target to the correct location, triggering a reward, while some watched a previously-trained bee perform the task and others simply found the ball (and reward) already at the target.

Afterward, each bee was challenged to move one of the three balls to the target location in five minutes or less. The researchers found that the 10 bees that watched another bee perform the task were the most successful, solving the task faster than the other two groups. Furthermore, some of the insects found better ways to move the ball – walking backwards and pulling it instead of just pushing it, as they had seen during the pre-trial demonstrations, the authors noted.

Findings show that bees can adapt to solve complex tasks

Changing how they moved the ball was not the end of the bees’ innovation, either, according to Science. While during the demonstration, it was always the farthest ball that was moved (because the others had been glued in place), most bees adapted when it came time to perform the task and opted instead to move the ball that was nearest to the target area.

This persisted, even when the study authors swapped out the nearest yellow ball for a black one, indicating that the bees understood the basic principal of the task and knew that they did not have to necessarily move a yellow-colored ball – any ball would do. The research team is hopeful that their findings are evidence that bees are good enough at problem-solving to overcome changes to their environment and to the climate.

“The bees solved the task in a different way than what was demonstrated, suggesting that observer bees did not simply copy what they saw, but improved on it. This shows an impressive amount of cognitive flexibility, especially for an insect,” co-lead author Dr. Olli J. Loukola said in a statement.

“It may be that bumblebees… have the cognitive capabilities to solve such complex tasks, but will only do so if environmental pressures are applied to necessitate such behaviors,” he added, telling NewScientist, “They don’t just blindly copy the demonstrator; they can improve on what they learned… I think that’s really important.”

The research demonstrated that, despite their small brains, bumblebees are capable of “cognitive flexibility,” Dr. Loukola told the website. The study showed that the insects are able to carry out tasks that they do not naturally encounter, and can even adapt and improve upon how those tasks are performed. This should not come as a surprise, Science said, as previous studies have shown that bees can use tools, feel happiness and basically have a built-in biological GPS.

Web articles – via partners/network co-ordinators. This website and its contents are the exclusive property of ANGA Media Corporation . We appreciate your feedback and respond to every request. Please fill in the form or send us email to: [email protected]
Previous: Roxana Baldetti Indicted: US wants to extradite ex-Guatemala VP
Next: Supernova 1987A Blast Wave Still Visible After 30 Years (Photo)