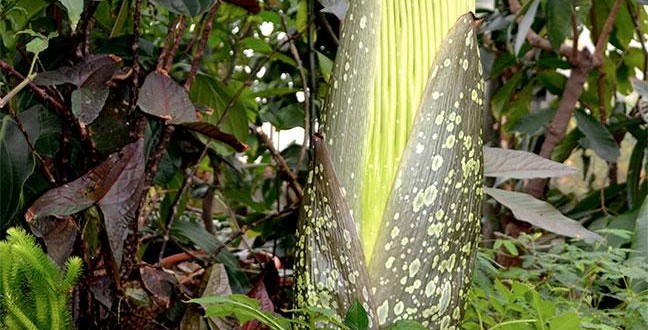 The University of Minnesota’s corpse flower bloomed overnight and a few thousand visitors lined up for the privilege of smelling its pungent smell that some compared to rotting fish.

For the first time in seven years, the University’s Titan Arum, or “Corpse Flower,” is about to make its malodorous appearance. The notoriously noxious plant, native to Sumatra’s equatorial rain forests, makes a big impression reaching up to six feet tall and emitting a scent often likened to “rotting meat.”

“Botanical gardens around the world build entire festivals around this single plant,” said Conservatory Curator Lisa Aston Philander. “Tens of thousands of visitors show up just to inhale this awful ‘carrion’ smell. Additionally, this is a thermogenic plant that warms itself, to temperatures comparable to humans, to allow the odor to volatilize. In essence, the warmer it gets, the more stinky it is, and the scent changes over the estimated 48 hours that the plant is in bloom.”

The College of Biological Sciences Conservatory will be open for public viewing (and smelling) of the Corpse Flower beginning February 1.

In its native habitat, the Titan Arum (Amorphophallus titanum) inflorescence uses its strong smell to cut through the riot of scents competing for the attention of the sweat bee, which pollinates the Corpse Flower. The bees can smell the plant for miles away. The plant produces a single leaf, resembling a small palm tree, that lasts up to a year. When the underground corm has stored enough energy, the leaf dies back and the corpse flower emerges.

Typically, the Corpse Flower blooms for only a few days before retreating into dormancy — until it’s ready to strike again. Our titan arum has not bloomed in seven years!

Web articles – via partners/network co-ordinators. This website and its contents are the exclusive property of ANGA Media Corporation . We appreciate your feedback and respond to every request. Please fill in the form or send us email to: [email protected]
Previous: Amazon launches free ‘AAA’ Lumberyard engine (Video)
Next: New design and equipment line for the Mercedes-Benz V-Class (Photo)