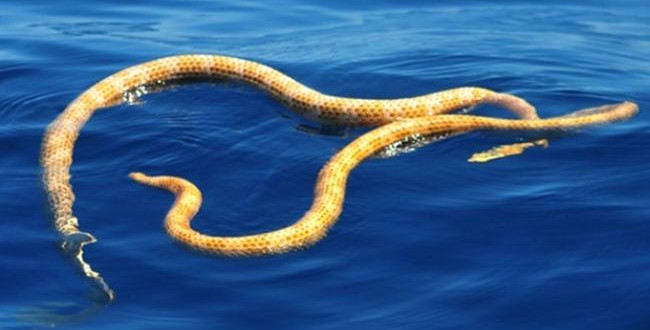 The snakes appeared to be alive and in good health. These snakes were last seen fifteen years ago living off the northern coast of Australia in the Timor Sea.

The identity of one species, the short nose sea snake, was confirmed after an Australian wildlife official sent a picture to study author Blanche D’Anastasi from the ARC Centre of Excellence for Coral Reef Studies at James Cook University.

“We were blown away, these potentially extinct snakes were there in plain sight, living on one of Australia’s natural icons, Ningaloo Reef,” D’Anastasi said in a statement. “What is even more exciting is that they were courting, suggesting that they are members of a breeding population.”

“We had thought that this species of sea snake was only found on tropical coral reefs. Finding them in seagrass beds at Shark Bay was a real surprise,” D’Anastasi said.

The IUCN Red List, the primary international conservation authority, considers both snakes Critically Endangered, which means they have special protections under international law. The spottings are particularly good new considering sea snake numbers have been dropping in several Australian marine parks and scientists cannot explain why this is occurring.

“Many of the snakes in this study were collected from prawn trawl by-catch surveys, indicating that these species are vulnerable to trawling,” said Vimoksalehi Lukoschek from the Centre of Excellence for Coral Reef Studies. “But the disappearance of sea snakes from Ashmore Reef, could not be attributed to trawling and remains unexplained.

“Clearly we need to identify the key threats to their survival in order to implement effective conservation strategies if we are going to protect these newly discovered coastal populations,” he added.

Web articles – via partners/network co-ordinators. This website and its contents are the exclusive property of ANGA Media Corporation . We appreciate your feedback and respond to every request. Please fill in the form or send us email to: [email protected]
Previous: Antero Reservoir: Temperature drops to minus 51 (Photo)
Next: Manitoba Workers comp to cover PTSD